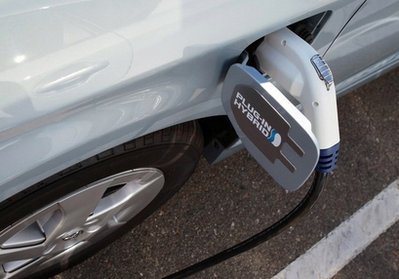 Charging electric cars at night eases a smog problem caused by fossil-fuel plants which provide the power for these vehicles, researchers reported on Tuesday.

Plug-in cars are viewed as a key tool in the fight for a cleaner planet as they do not emit tailpipe pollution when they run on electricity.

But they contribute indirectly to pollution, as well as global warming, if their electricity comes from a power station that runs on coal, oil or gas.

In a study published in a British journal, scientists in the United States simulated the local impact from "plug-in hybrid electric vehicles," or PHEVs, which are cars that can switch from battery power to petrol.

Their computer model was based on predictions for 2018 of emissions of nitrogen oxides, the basic ingredient for ground-level ozone, in four major cities in Texas: Dallas/Forth Worth, Houston, Austin and San Antonio.

The study compared likely pollution levels when 20 percent of mileage in the region was carried out either by PHEVs or by vehicles that were only petrol-powered.

Regardless of the scenario, ozone pollution improved when PHVs were used, because they did not emit nitrogen oxides.

As for when PHEVs should be recharged, the paper found it was smarter to plug in the vehicle at night.

Extra demand from fossil-fuel power stations at night did cause levels of nitrogen oxides to rise compared to the typically shorter recharging periods in daytime.

But much of the gas emitted at night time had dissipated by daybreak. This eased the smog problem by a small but detectable margin.

Ozone, a triple molecule of oxygen, is protective when it is in the stratosphere, because it filters ultraviolet rays that can cause skin cancer and DNA mutations in plants.

But at ground level, where it forms from a reaction between sunlight and nitrogen oxides from fossil fuels, ozone irritates the body's airways, becoming a hazard for people with cardiac or respiratory problems.

The finding will guide policies on how to encourage cleaner cars, say the authors.

"This further supports efforts to develop regulation to encourage night-time charging -- an example would be variable electricity pricing," said Tammy Thompson of the Massachusetts Institute of Technology (MIT).

"As more of the fleet switches over to PHEVs and larger demand is placed on the electricity grid, it will become more important that we design and implement policy that will encourage charging behaviours that are positive both for air quality and grid reliability."

The paper appears in the journal Environmental Research Letters.