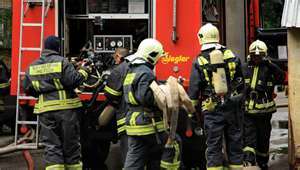 Eight people were killed and eight others were hurt when a major fire broke out at an industrial waste treatment plant in oil-rich western Siberia, the emergencies ministry said on Saturday.

"Eight people died, (and) eight people were wounded," the regional emergencies ministry said in a statement, adding that the survivors were hospitalized.

The fire broke out early Saturday at the oil-sludge processing plant located between the cities of Tyumen and Khanty-Mansiisk and belonging to the Invest-Oil company.

Officials said earlier seven people had perished in the blaze. The initial death toll stood at four but rescue teams found more bodies as they combed through the debris of the plant, officials said.

The fire, which consumed an area of some 2,300 square meters (25,000 square feet), had been extinguished by 0900 GMT, the emergencies ministry said, adding that there was no threat to residential communities.

Moscow-based investigators said, citing preliminary information, that the fire was caused by an explosion but gave no further details.

Industrial accidents including fires are common in Russia and are often linked to aging equipment and lax enforcement of safety rules.