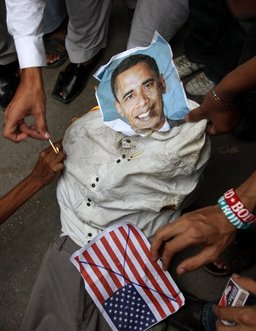 Thousands of people thronged the streets of Pakistan's biggest city of Karachi on Saturday in the latest protest against a U.S.-made anti-Islam film, police and witnesses said.

The protesters, who included activists from the hardline 'Sunni Tehreek', wore green and white headbands as they marched through the city's main M.A. Jinnah road while some trampled on the American flag.

They chanted slogans including "Hang the American film maker" and "We are ready to sacrifice our lives for the honor of Prophet Mohammed.”

"We strongly condemn this anti-Islam movie, it is a criminal act," Mufti Muneeb-ur-Rehman, a prominent religious leader told the rally, and called for a global ban on insulting "all prophets and messengers.”

Shafiq Ahmad, a senior police officer in Karachi, said there were "at least 15,000" protesters while rally organizers claimed "millions of people" participated.

Police beefed up security before the rally, while paramilitary forces were also deployed.

The crudely-made "Innocence of Muslims" movie has sparked anger and at times violent demonstrations across the globe.

Pakistan experienced the worst of the violence last Friday when nationwide rallies mobilized more than 45,000, many members of right-wing religious parties.

At least 21 people were killed and 229 wounded, mainly in clashes with police.

If you demonstrate against the US, then don't ask for aid from them. You can't have it both ways.