Chinese Premier Calls on People to Back Communist Party 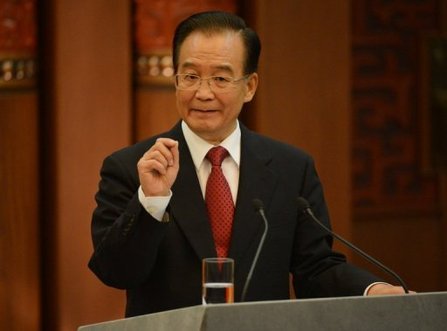 Chinese Premier Wen Jiabao called on Saturday for his people to unite in support of the Communist Party and its outgoing leader, President Hu Jintao, ahead of a pivotal congress to usher in new leadership.

The announcement comes amid a damaging political scandal involving Bo Xilai, a senior party boss who is to stand trial for a litany of crimes including abuse of power and improper sexual relations.

"Let us rally more closely around the CPC central committee with comrade Hu Jintao as the general secretary," said Wen in a speech that came two days before the 63rd anniversary of the proclamation of People's Republic.

Hu will handover power as head of the party to Vice President Xi Jinping during the congress on November 8, but will remain the country's president until next March.

The congress will allow the party to "open new perspectives on development," Wen told an audience of some 2,000 diplomats and officials gathered at the Great Hall of the People in Tiananmen Square.

Both Bo's fate and the date of the congress had been the subject of intense speculation over whether China's biggest political intrigue in decades would unsettle the highly choreographed leadership change.

The announcement on Bo marked an unprecedentedly harsh public rebuke for a Chinese Communist official as authorities looked to lay to rest the damaging episode that shocked China and saw Bo's wife convicted of murder.

State media on Saturday lauded the party for putting on a forceful display of unity by expelling Bo, but web users denounced the case as a sign of deep-rooted corruption.

In his speech, Premier Wen, who will also give up his position as head of government next spring, recapped his party's achievements in expanding economic growth but said more needed to be done.

"We have followed the overall guideline of making progress while ensuring stability, strengthened and improved macro regulations and given greater priority to stabilizing growth," he said.

But, he added: "While recognizing achievements, we must always keep a cool head. Our country is still at the primary stage of socialism and the productivity is not high."

He also touched upon foreign policy, amid an ongoing territorial dispute with Japan over remote islands in the East China Sea which has seen relations between the two countries plummet.