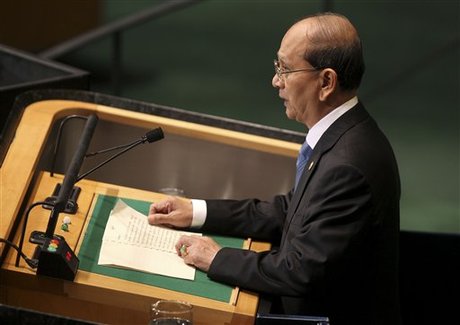 Thein Sein, the first Myanmar leader to speak to the U.N. General Assembly, also told the annual gathering on Thursday that he wants to "completely end" a long-running war with ethnic rebels in Kachin state.

Thein Sein, a former junta general now driving through speedy reforms in his impoverished state, spoke as Suu Kyi comes to the end of a triumphant tour of the United States which some feared could overshadow the president.

But he told world leaders: "This week she is also in New York. As a Myanmar citizen I would like to congratulate her for the honors she has received in this country in recognition of her efforts for democracy."

Less than two years ago, his comments would have been unthinkable.

Suu Kyi, a Nobel Peace laureate, spent 15 years under house arrest during the junta's rule. She was freed in November 2010 and is now a member of parliament pressing for domestic change as well as the lifting of international sanctions. The United States eased its trade sanctions on Wednesday.

Highlighting recent elections, the release of political prisoners and the ending of media censorship, Thein Sein stressed the "mutual tolerance" and "magnanimity" that now marks politics in the country also known as Burma.

In Myanmar, the state-run New Light of Myanmar took the rare step of publishing an English-language version of Thein Sein's speech in full, with praise of Suu Kyi featuring on the front page.

Suu Kyi met with US President Barack Obama and received the Congressional Gold Medal -- the highest honor of the US legislature -- during her 18-day tour of the United States.

The opposition leader met Thein Sein at his New York hotel on Tuesday and has expressed cautious optimism about the changes under way.

"There has been change, not yet all the changes necessary to make sure we are going to be a genuinely democratic society, but there have been changes," she said in one speech this week.

Suu Kyi will go on to visit western states while a ministerial meeting on Myanmar in New York on Friday could bring new international encouragement for Thein Sein's government.

The president stressed efforts being made by the nominally civilian government to end ethnic strife in Myanmar and said he hoped to end the war with Kachin rebels in the north.

The rebels have been fighting government forces since the country's independence in 1948.

The president said agreement has been reached with 10 ethnic armed groups in the country and that peace negotiations will "continue to reach a final peace agreement that would completely end the armed hostilities."

The government and the Kachin Independence Army have held several rounds of talks and Thein Sein said the two sides are "working to further strengthen confidence building measures.

"We consider any loss of life and property from either side in the armed conflict as a loss for the country," he said, in comments which again highlighted the startling changes in Myanmar.

The president said that deadly unrest between Buddhist and Muslim communities in Rakhine state was one of the "unfortunate and unexpected issues" that his government had to confront.

Dozens of people have been killed in the unrest and an estimated 70,000 people, mainly Rohingya Muslims, have been left displaced in government-run camps and shelters.

The government has been criticized by Muslim nations for its handling of the crisis, but Thein Sein said an independent commission would report on the strife and that "people living in our country, regardless of race, religion and gender, have the right to live in peace and security."

Answering international critics, he added: "Myanmar has the right to secure our borders and also to safeguard and protect our sovereignty. We will do our utmost to solve this issue in line with international norms."