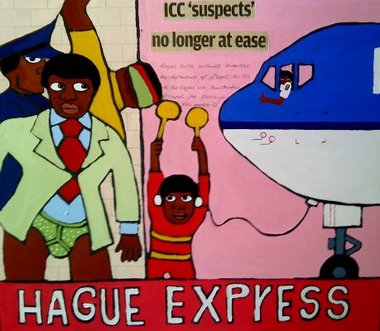 Kenyan artist Michael Soi followed the recent arrival of the post-poll violence suspects at the International Court in The Hague with interest -- he had painted that very scene three years ago.

"The Hague Express" in charcoal and acrylic, is one of three huge canvasses piled up in the container that serves as Soi's studio.

It shows two portly pigs and two fat cats clad in prison overalls and chained together disembarking from a KLM plane and being herded towards a sign saying The Hague.

They are followed by a piece of luggage marked "evidence" from which clubs and machetes protrude. An arrivals announcement board say that flight KL566 from Nairobi has arrived.

"I thought those people would never be brought to justice so I sent them to The Hague myself," Soi, 38 explains, referring to the politicians accused of having been behind the violence that left 1,500 people dead following the disputed 2007 presidential poll.

"I did four pieces around that. One of the others shows six people arriving, but that just a coincidence."

Soi, born and bred in Nairobi, admires Diego Rivera, the Mexican muralist, but dislikes having his own work compared to that of any other painter, although pop art influences are evident in his work.

He started out painting themes likely to please children then realized that "a cat has a lot in common with a politician. When it's hungry it'll come and rub up against you. And then the rest of the day it just sits there."

So he tackled political subjects, often inspired by clippings from Kenyan newspapers.

Another charcoal, acrylic and newsprint collage work "Government of National Unity" shows the two principals of Kenya's post-election-violence unity government Mwai Kibaki and Raila Odinga, side-by-side as cats in fluorescent sharp suits, each man drawing a revolver on the other.

They are flanked by henchmen cats in flashy ties who are surreptitiously strangling or silencing cats from the opposing side whilst they themselves are threatened by a catapult and a gun.

Newsprint clippings stuck on to the canvas detail the ups and downs of the relationship, reflecting the almost obsessive way Kenyan papers give over the front page to the Raila-Kibaki tandem.

Other subjects on view in the studio, one of several containers in the grounds of the Kuona trust, include "The evolution of the Kenyan politician" and the arrest of a Kenyan who tried to traffic an albino man in order to sell his body parts for witchcraft.

Dressed in sloppy beige trousers and a black T-shirt, Soi, who sports tattooed barbed wire coiled round one wrist, would like to see more Kenyans taking more of an interest in his work.

"I was asking my friends why they don't come to exhibitions. People would rather buy a Mercedes Benz than a piece of art," he said.

Undaunted, when Soi recently got financing to create 30 works for an exhibition at the Go Down arts center here he decided to give them away to people attending the exhibition. The potential acquirers only had to send a mail to him explaining why they should receive a work for free.