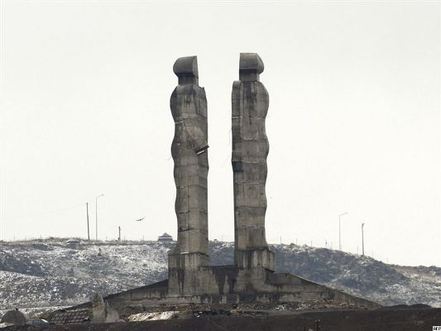 Turkey began Tuesday to demolish a 100 foot monument near its eastern border dedicated to friendship with Armenia after the prime minister called it a "monstrosity", Anatolia news agency reported.

Overriding widespread protests, the company tasked with demolition by the local authorities in Kars city took apart the first piece, which is one of two heads of the statue, depicting two figures emerging from one human shape, a witness told Agence France Presse.

The dismantled piece, weighing 19 tons was cut and brought down by a crane, the witness said. The whole demolition process should take 10 days.

The statue was commissioned in 2006 to place emphasis on friendship between Turkey and Armenia with a history of enmity and suspicion.

The Islamist-rooted Prime Minister Recep Tayyip Erdogan unleashed a storm of criticism during a visit to Kars in January when he described the monument as a "monstrosity" and "weird", bemoaning that it was sited near the tomb of an ancient Islamic scholar.

In 2009, Turkey and Armenia signed landmark accords to end decades of animosity, establish diplomatic relations and re-open their border.

But the effort faltered amid ensuing spats and Armenia froze the ratification process of the accords last year.

Armenians say up to 1.5 million of their kin fell victim to genocide during World War I under the Ottoman Empire.

Turkey counters that 300,000 to 500,000 Armenians and at least as many Turks died in civil strife when Armenians rose up against their Ottoman rulers and sided with invading Russian forces.