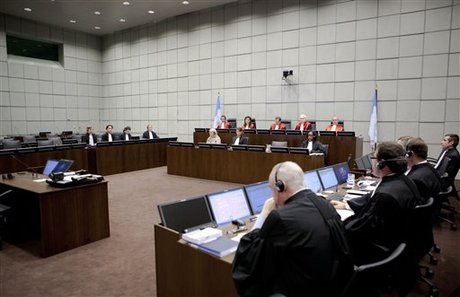 The Appeals Chamber of the U.N.-backed Special Tribunal for Lebanon probing ex-PM Rafik Hariri's murder has unanimously dismissed Defense challenges to the Tribunal’s legality, the STL said in a statement on Wednesday.

Defense counsel for the four accused had challenged, before the Trial Chamber, the legality of the Tribunal, arguing that it violates Lebanese sovereignty and that it has selective jurisdiction and no authority to try the accused.

The decision was appealed by counsel for three of the four accused.

Four of the five Appeals Chamber judges agreed in their decision, issued on Wednesday, that they lacked the authority to review a Security Council resolution. However, in a separate opinion, STL President Judge David Baragwanath expressed the view that the STL, as a court of law, must exercise a limited authority to review certain aspects of Security Council resolutions.

He nonetheless concluded that the Defense Counsel have failed to establish that the Security Council acted beyond its authority and joined the other judges in dismissing the appeals.

Defense Counsel have argued in both Chambers that while the February 14, 2005 attack was tragic, it did not constitute a threat to international peace and security, which was the prerequisite for the Security Council’s intervention to establish the STL.

The Appeals Chamber “considers that the Security Council has a broad discretion as to the characterization of a particular situation as a threat to peace and security and that the Tribunal cannot judicially review the Security Council’s actions,” the summary of the decision reads.

The judges of the Appeals Chamber also noted that once the Security Council identified the existence of a threat to peace and security under its Charter, it had discretion to determine which measures are required to maintain or restore international peace and security, in this case, the creation of a Tribunal.

Pre-Trial Judge Daniel Fransen has recently set March 25, 2013 as the tentative date for the start of trial.

Warrants have been issued against four Hizbullah members – Salim Ayyash, 48, Mustafa Badreddine, 51, Hussein Anaissi, 38, and Assad Sabra, 35 -- but Hizbullah leader Sayyed Hassan Nasrallah has said the STL is a U.S.-Israeli conspiracy and vowed none of the suspects would be arrested.

not a surprise--lawyer for the accused wants to dismiss everything on technicalities instead of proving his clients' innocence.

what does that tell you?

The wheels of justice moves slowly but sooner or later the Syrian/Farsi/Hizbeez will be brought to justice...

Syria and the Hezz are caught in a court they can't influence or kill.

Good! Let's get on with it.