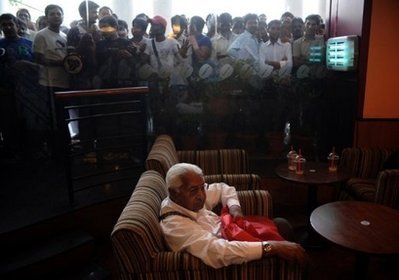 As Indian director Onir applied the final touches to his new movie "I Am", he paused to pay tribute to the 400 people who responded to his Facebook campaign to help finance the project.

"Thank you all for being a part of 'I Am'," Bollywood's only openly gay filmmaker wrote on his Facebook page. "I am because you are."

Onir, who uses one name, cannot wait for the film's release on Friday -- a success achieved against the odds after he nearly gave up due to lack of studio backing. Producers were scared off by the "risque" content, one critic said.

The movie explores subjects considered taboo by many in India, from child sexual abuse to police harassment of gay men and a single woman's search for a sperm donor.

Onir says he raised about one-third of the 30 million rupees ($675,000) budget through donations, most of them from a network of Facebook contacts.

The smallest donation was just 1,000 rupees ($23), but the 55 top donors who gave more than 100,000 rupees each will be rewarded with a co-producer credit and a share of any profits.

"Lots of people outside the industry would ask me how they could get involved in films," he said. "So I decided to post a message on my Facebook page asking people to donate money to this project."

Just six weeks later, he shot the first scene in Bangalore, as donations began to arrive from India and as far afield as the United States and Australia.

Among the major backers were Boston-based psychotherapist Sarah Loper Sengupta and The Humsafar Trust, a gay rights campaign group.

"Some people said they liked the film's subject. Or they wanted to learn about film making. Or they simply wanted their name in the credits," Onir laughed.

Bollywood is famous for its song-and-dance extravaganzas, but a new genre of Hindi cinema has taken off with "indie" films that choose gritty realism over melodrama.

Even so, the 41-year-old Onir was familiar with rejection after his first film, "My Brother... Nikhil", which told the story of a gay Indian man who fights discrimination after being diagnosed with HIV.

"I remember taking the idea to different producers, and everyone wanted me to make the protagonist straight," he said. "One producer actually asked me, 'Why can't the guy get AIDS from a popular Bollywood actress?'"

"My Brother... Nikhil" did finally get made and became a critical -- if not commercial -- hit when released in 2005.

Film critic Anupama Chopra, who was impressed by Onir's debut movie, admitted that Bollywood was still not good at taking risks.

"Many producers are pushing unconventional films these days, and big-name actors are backing them, but in the case of "I Am" the material is just too risque for studios," she told Agence France Presse.

"Bollywood is an inherently conservative industry and producers assume that the audience is also conservative, so they tend to back safe films."

Chopra said the funding of "I Am" could prove a useful lesson to experimental directors.

"If it finds its audience, it could make things easier for newer filmmakers following in his footsteps," she said. "In a country of a billion-plus people, there must be enough viewers interested in a film dealing with tough issues."

But others are more skeptical.

"Onir's method can work in a one-off case but it's not going to become a popular way to fund films here," Komal Nahta, founder-editor of the Bollywood website koimoi.com, said.

"Unlike most Bollywood films, this is not a terribly commercial film, it's small budget, it's really the exception that proves the rule."

For Onir, the fact that the film is about to be released is both a personal triumph and an acknowledgment of the power of social media sites to mobilize campaigns.

"We shot footage as and when we got funds. Sometimes I used to wonder what if we don't get enough money? What if I get stuck midway with an unfinished film?" he said.

"Now I just want people to turn up and watch the film."