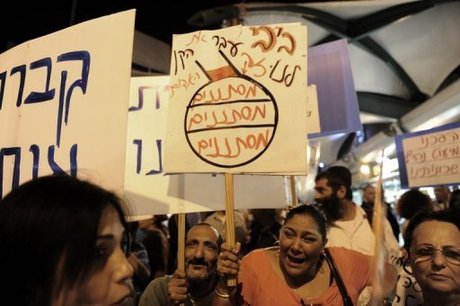 Israel has turned back dozens of African asylum-seekers, mostly Eritreans, trying enter the country from Egypt, Human Rights Watch and two other NGOs said on Sunday.

"Thousands of (Eritrean asylum-seekers) flee persecution in their country every year.

"In forcing asylum seekers and refugees to remain in Egypt and in deporting others, Israel is putting them at risk of prolonged detention in Egyptian prisons and police stations where they cannot claim asylum," it added.

They also face "forcible return to Eritrea, and serious abuse by traffickers in the Sinai region."

The NGOs implored Israeli to abandon its policy, reminding the Jewish state it signed the 1951 Refugee Convention in Geneva, which requires "all countries to respect the principle of nonrefoulement," a principle of international law which prohibits turning over a victim of persecution to his persecutor.

"Not only are there credible reports that Israeli soldiers are blocking asylum seekers at the border, but also that they are using violence to do so," HRW lawyer Gerry Simpson said.

According to the U.N. refugee agency (UNHCR), more than 80 percent of Eritreans seeking asylum throughout the world are recognized as refugees, the statement added.

More than 60,000 Africans are estimated to be living in Israel illegally, most of them in run-down neighborhoods of southern Tel Aviv.

Most are Sudanese and Eritreans who entered from Egypt's Sinai Peninsula.

Rising tensions over the growing number of illegal immigrants exploded in May when a protest in south Tel Aviv turned ugly, with demonstrators smashing African-run shops and property, chanting "Blacks out!"

Israel's construction of a nearly 250-kilometer (155 mile) fence running the length of its border with Egypt is due for completion by year end.

Eritrean illegals in order to get to Israel have to pass through Sudan and Egypt on their way.
These two countries do not stop them yet they and HRW complain when Israel does.
Something smells very fishy here.

Your comments and responses, not only to this comment by me shows that your way of thought is so warped, you are another of those people who believe that all the problems in the Middle East are because of Israel.
From someone looking at the situation from the outside, I can however fortunately assume that your thoughts are not those of the majority of the true and honest Lebanese people.