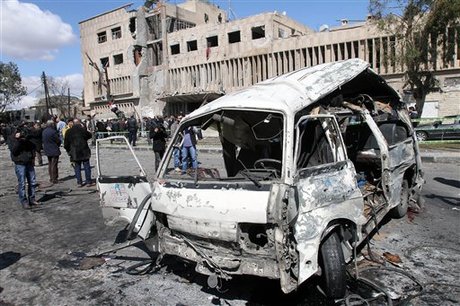 Explosions shook Syria's capital on Monday as warplanes launched their heaviest air raids yet and two car bombs struck, with the U.N.-Arab League peace envoy saying the conflict was going from bad to worse.

The air raid blasts, heard coming from several outlying districts, rattled windows in the city center and were among the most intense in Damascus since the beginning of Syria's 19-month conflict, an Agence France Presse correspondent said.

They were followed by two car bombings in and around the capital.

The first struck the predominantly Christian and Druze area of Jaramana, just outside Damascus, killing 11 people, according to state news agency SANA.

The violence came as world powers looked to pick up the pieces of a failed effort for a Muslim holiday ceasefire, with envoy Lakhdar Brahimi in Moscow and due in China on Tuesday as he prepares to present new ideas to the U.N. Security Council.

"I have said and it bears repeating again and again that the Syrian crisis is very very dangerous, the situation is bad and getting worse," Brahimi said after talks with Russian Foreign Minister Sergei Lavrov.

On Monday, the final day of the four-day Eid al-Adha holiday, the Syrian military launched more than 60 air strikes around the country, said the Syrian Observatory for Human Rights.

"These are the heaviest air strikes since warplanes were first deployed over the summer," the watchdog's director, Rami Abdel Rahman, told AFP.

"The regime is looking to make real gains. There are battles in all of these areas being hit," he said.

Warplanes struck targets around Damascus, the Observatory said, with attacks focused on rebel positions in a northeastern belt where President Bashar Assad's regime has been battling to take opposition strongholds.

Dozens of soldiers were wounded and 11 killed in fighting in the area, it said.

The Observatory reported other air raids on villages and towns across the northwestern province of Idlib, where regime forces and rebels have been locked in fierce fighting over the Wadi Deif military base.

The army's general command in a statement blamed "terrorists" for violating the failed Eid truce.

"On the fourth and last day of the declared truce, armed terrorist groups continued to launch attacks on unarmed citizens, and targeted army and security checkpoints," it said.

The truce proposed by Brahimi for Eid, which started on Friday, fell apart amid clashes, shelling and car bombings only hours after it had been due to take effect.

More than 400 people have died since the start of Eid, according to the Observatory, including at least 80 on Monday.

The Britain-based group relies on a countrywide network of activists, lawyers and medics in civilian and military hospitals, and says its tolls take into account civilian, military and rebel casualties.

U.N. Secretary General Ban Ki-moon said on Monday he was "deeply disappointed" by the collapse of the truce and urged all sides "to live up to their obligations and promote a ceasefire."

U.N. diplomats say Brahimi was realistic about the ceasefire's chances and is now looking ahead to new efforts to tackle the crisis.

Diplomats told AFP that he will go back to the Security Council with fresh proposals in November after the visits to Russia and China -- which have repeatedly vetoed resolutions threatening action against Assad's regime.

In a statement Monday, Syria's foreign ministry partly blamed the Security Council for the ceasefire's failure, saying it should have condemned a car bomb in Damascus Friday that killed at least eight people and wounded more than 30.

"The Council's inability to condemn this attack encouraged the terrorists to continue their crimes," it said.

The Syrian uprising, which began in March 2011 as a peaceful movement, has steadily militarized after being met with brutal state repression and has left more than 35,000 people dead, according to rights groups.

Most rebels, like the population, are Sunni Muslims in a country dominated by a minority regime of Alawites, an offshoot of Shiite Islam.

Bomb all you want ya Bashar. You won't win.