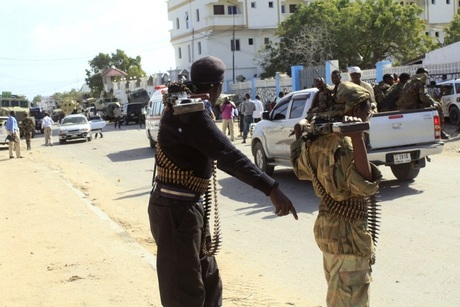 Two suicide bombers attacked a restaurant in Somalia's capital Mogadishu on Saturday, wounding several people, police said, and killing one victim, according to a witness.

"There were two suicide bombers who attacked the Village restaurant. The two of them have died and other people who stayed in the place were injured. We are still investigating the casualties," said Abdi Adan, a Somali police officer.

A witness to the attack, Ahmed Salad Ibrahim, said a security guard at the restaurant had been killed in the blast -- a report police said they could not immediately confirm.

"I was sitting inside the restaurant premises when gunfire started at the gate. We stood and rushed to find out what was happening and I saw the security guard at the gate holding the bomber before he detonated," Ibrahim said.

"As I was shocked with smoke and dust covering the whole area, another suicide bomber detonated himself outside," he added.

"The guard and the two bombers died while many other civilians were injured, but I cannot say exactly how many were injured."

Another witness, Idle Husien, said there had been a "heavy exchange" of gunfire followed by large explosions.

"I'm not far away from the place and I can see people injured and the severed dead bodies of the suicide bombers," Husien said.

The Village is owned by a restaurateur of Somali origin who recently relocated to Mogadishu from London, where he trained as a chef.

In September another of his restaurants, also named the Village and located in Mogadishu, was hit by a suicide attack that killed 18 people, including three journalists.

The restaurants have been mentioned several times recently in the international press as a symbol of a nascent return to normal life in Mogadishu after more than 20 years of civil war and violence.

The urban warfare that had gripped the Somali capital has stopped since the country's al-Qaida-linked Shebab insurgents were chased from the city in August 2011 by Somalia's rudimentary army and the 17,000-strong African Union force AMISOM.

The Shebab, who were long active mainly in southern and central Somalia, have increasingly switched to guerrilla tactics after abandoning fixed positions in Mogadishu.

The fighters have been forced to flee a string of once-powerful strongholds -- including most recently the strategic and lucrative southern port of Kismayo.

But the Shebab remain a potent threat, still controlling rural areas as well as carrying out guerrilla attacks -- including suicide bombings -- in areas apparently under government control.

Saturday's attack came as Somalia's new leaders worked to form a government under a U.N.-backed process to restore stability after two decades of anarchy.

Somalia has lacked an effective central government since president Mohamed Siad Barre was ousted in 1991, unleashing cycles of bloody conflict that have defied countless peace initiatives.

Newly elected President Hassan Sheikh Mohamoud took office in September after being chosen by the country's new parliament, bringing an end to eight years of transitional rule by a corruption-riddled and Western-backed government.