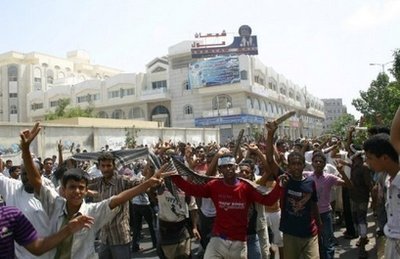 Two servicemen and four civilians were killed and another 23 were wounded in south Yemen during a shutdown called by anti-government protesters on Saturday, officials said.

The ministry of defense said an officer and a soldier were killed and two more soldiers were wounded, but gave no further details, Agence France Presse reported.

However, local officials said protesters opened fire on troops as they tried to dismantle roadblocks set up near Al-Mansura neighborhood in Aden to demonstrate against the regime of President Ali Abdullah Saleh.

Two soldiers and a civilian were wounded there, they said.

They said troops moved into the area from where they suspected the attack was launched and opened fire, killing at least four civilians and wounding at least another 23 more.

The casualties were taken to a hospital in Aden, the south's main port city, a medical source said.

Much of Aden was paralyzed on Saturday following the strike call, local officials said. The city has been a hotbed of protests against Saleh who has been in power for 32 years.

Four people were killed on Thursday and Friday in southern Yemen during clashes between security forces and suspected al-Qaida activists.

In addition to anti-regime protests against Saleh, Yemen has also been battling a secessionist movement in the south, a Shiite rebellion in the north and an al-Qaida resurgence.