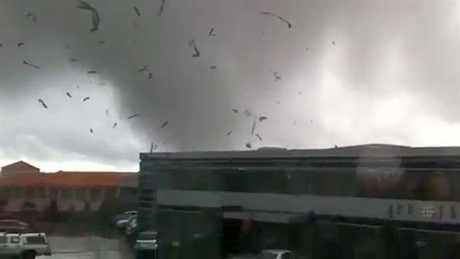 Packing winds of 200 kilometers an hour (125 miles an hour), the twister hit the suburb of Albany without warning at about 3pm (0300 GMT), flipping cars and uprooting trees as it carved a trail of destruction stretching for kilometers.

Television footage showed huge pieces of roofing and wreckage flying through the air, sending panicked locals fleeing for their lives.

Witnesses said the tornado sounded like "a giant vacuum cleaner" when it tore across the Albany Megacentre, one of the largest shopping malls in the country.

Authorities initially reported two dead but later revised the toll down to one, with Auckland mayor Len Brown expressing amazement more were not killed, particularly considering the hundreds who died in recent U.S. twisters.

"That there was a big, mean beast of a tornado... we're just extraordinarily lucky that there hasn't been more loss of life," he told TV3.

The tornado is the latest in a string of disasters to hit New Zealand, including two earthquakes in Christchurch, the second of which claimed more than 180 lives and a colliery explosion last November in which 29 miners died.

Prime Minister John Key said he was closely monitoring the situation and would offer authorities in Auckland any assistance required.

"Obviously it's been a very powerful and quite devastating tornado that's caused a significant amount of damage in a much localized area," he told reporters.

New Zealand Metservice meteorologist Peter Kreft said the tornado hit without warning and the damage stretched for five kilometers (3.1 miles), with the eye of the storm measuring more than 10 meters (33 feet) across.

"Tornadoes in New Zealand are typically of that size, they're nothing like the size that is observed in the Midwest of the US," he told Radio New Zealand.

"So while it's a tragic and devastating event for the area it's passed over, in the broader scheme of things it's a relatively small tornado.