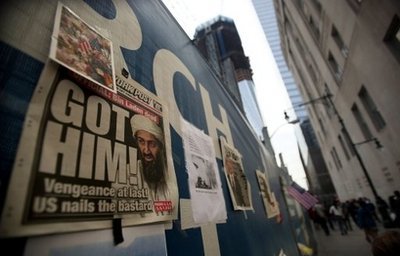 It is only a matter of time before Osama bin Laden's killing by crack U.S. forces is made into a Hollywood film -- and one Oscar-winning director could be ahead of the game, reports said Monday.

Kathryn Bigelow, who won an Academy Award for her 2008 film "The Hurt Locker," was already working on a movie about the Al Qaeda leader's death -- which she could still re-think after Sunday's covert operation in Pakistan.

According to the Hollywood Reporter industry daily, Bigelow has already been discussing a project provisionally entitled "Kill Bin Laden," based on a previous botched attempt to get the Al Qaeda chief.

She and her screenwriting collaborator Mark Boal -- who worked with Bigelow on "The Hurt Locker" -- have been meeting with actors for the action thriller project, when Sunday's shock development occurred.

"But now that Bin Laden has been killed, what happens to the Kill Bin Laden project?" it said, adding that the original project was based "on a failed Black Ops mission by the U.S. military to capture the Al-Qaeda leader."

The actual killing could help the project, although "we can't imagine the events surrounding Bin Laden's ultimate killing not being incorporated into the script in some fashion," it added.

Or Bigelow could lose interest altogether, it added, "especially given all the other Bin Laden projects that will likely be fast-tracked to capitalize on the intense worldwide interest in this subject.

The daily Variety meanwhile said that Boal's untitled script about the operatives hunting Osama bin Laden centers on the very team that wound up killing the terrorist leader.

Sources close to Boal tell Variety that he is still working on the script, and will definitely include the 40-minute fire-fight at the compound in Pakistan where bin Laden was found and shot to death Sunday.

The Hollywood Reporter said its sources said Bigelow and Boal -- who could use his contacts as a former investigative journalist to find out more details of Sunday's operation -- will spend this week figuring out their next move.

"The next few weeks will likely see a ton of new Bin Laden projects, especially as the details of the U.S. mission to kill him become known," it added.