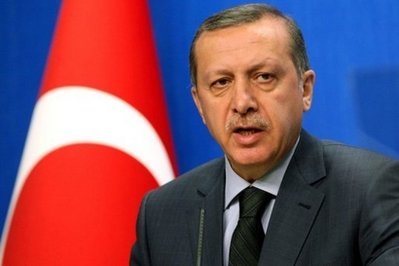 Turkey on Tuesday urged Moammar Gadhafi to "immediately" cede power and leave Libya, in its first public call on the veteran strongman to go.

"We wish that the Libyan leader pulls out from Libya and cedes power immediately -- for himself and for the future of his country -- without causing more bloodshed, tears and destruction," Prime Minister Recep Tayyip Erdogan told reporters.

Gadhafi's departure has become "inevitable," he said, adding that the Libyan leader "must take this historic step in the name of Libya's future, territorial integrity and peace."

It was the first time that Turkey, NATO's sole Muslim-majority member and a key regional player, publicly urged Gadhafi to step down, even though Erdogan said he had previously conveyed the same message in contacts with the administration in Tripoli.

"Unfortunately, Moammar Gadhafi ignored our advice and ... opted for bloodshed, oppression and attacking his own people," Erdogan said.

Gadhafi "must return power to its genuine owners -- the Libyan people," he said. "Libya is not the property of a single man or one family."

The marked toughening in Turkey's tone came ahead of a meeting of global powers in Rome Thursday to seek a political settlement of the Libyan turmoil amid a bloody stalemate in the fighting and an escalating humanitarian crisis.

The International Contact Group, to which Turkey is member, is expected to discuss also whether to arm and how to finance the rebels.

Appealing to the Libyan opposition, Erdogan said: "It is vital that your struggle, your suffering result in an outcome that would embrace the whole Libyan people."

"The fulfillment of the Libyan people's just demands is our greatest desire," he added.

On Monday, Turkey closed its embassy in Tripoli in the wake of weekend attacks on Western missions.

Demonstrators Sunday torched British and Italian diplomatic buildings after Libya accused NATO of trying to assassinate Gadhafi in an attack that killed one of his sons and three young grandchildren.

He added however that Gadhafi should "see and feel that the Libyan people suffer the same pain."

Turkey had harshly criticized the U.S.-led air strikes on Libya launched on February 19 and insisted on a limited combat role for NATO once the alliance took over the command.

It has refused to take part in air raids, contributing six military vessels to a patrol mission enforcing a U.N.-mandated arms embargo in Libyan waters.

It has also undertaken several humanitarian operations, notably the evacuation of more than 300 wounded Libyans from rebel-held areas for treatment in Turkey.

In early April, Ankara proposed a "roadmap" to end the conflict, urging an immediate ceasefire, the lifting of sieges by regime forces of rebel-held towns and the initiation of a "transformation process" that would lead to free elections.