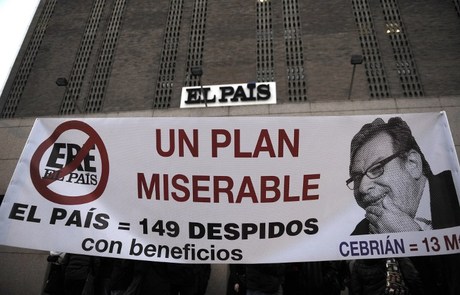 Spain's top daily newspaper El Pais began delivering redundancy notices on Monday to nearly one-third of its staff including some of the paper's best-known writers.

Last month El Pais, part of heavily indebted Spanish media group Prisa, announced there would be 129 layoffs and 20 early retirements, bringing the total number of job cuts to 149 out of about 460 staff.

All remaining staff are being forced to take a 15-percent pay cut as the paper struggles against a slump in advertising and the rise of Internet news, where profits are hard to come by.

On Monday, the journalists began to hear who will be forced to depart the newspaper, born in 1976 during Spain's transition to democracy after the dictatorship of Francisco Franco.

"I am on the list," one of the paper's big names, journalist Ramon Lobo, wrote on his Twitter account after learning of his departure. "My profile online and my career are not enough."

Another well-known El Pais journalist, Manuel Cuellar, said he received an email on Sunday telling him to appear on Monday to hear the details of his redundancy.

Manuel Gonzalez, the head of the El Pais works committee, which represents the staff, said lawyers were calling up the departing journalists in stages, starting Monday with the first 52, who work in Madrid.

Management drew up the list of redundancies alone, he said, targeting those who do not have an online profile "even though they work every day on the Internet".

Last week, El Pais journalists went on strike on three separate days to protest the layoffs. They also held a demonstration on Tuesday outside the newspaper's Madrid offices decrying a "pitiful" redundancy plan.

Prisa reported a loss of 31.45 million euros ($40 million) in the first nine months of 2012, including a provision related to a legal row with cable company ONO. A year earlier it made a profit of 17.93 million euros.