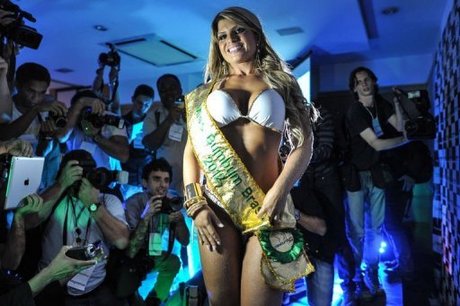 A jury of six women and five men picked the 25-year-old Felizardo among 15 finalists in the second annual edition of the contest, held in a Sao Paulo hotel.

"I am overwhelmed, very, very happy," the winner said, choking back tears. "I would like to thank those who voted for me, those who believed in me, my family, my friends."

Felizardo, who is single, said she was honored to receive the unusual title.

"I am very proud of my bumbum (as Brazilians call the backside), proud to represent the Brazilian woman," she added, stressing that she owed her victory to years of hard gym training.

The 15 finalists competed in Friday's grand finale before a predominantly male crowd of journalists from around the world after surviving an online eliminatory round that drew representatives of the country's 26 states and the federal district Brasilia.

The jury, which included Rosana Ferreira -- last year's Miss Bumbum --, delivered its verdict after the contestants sashayed down the catwalk first in evening dresses and later in string bikinis that revealed the best part of their anatomy.

"I am here just for work. But if they (the contestants) don't mind showing their bums to the whole world, why not?" she added.

The popular contest is however lifting spirits in this huge metropolis wracked by a murder spree that has claimed more than 300 lives in the past month.

The young ladies worked hard to prepare for the final, including taking surfing and jungle training courses to tighten their buns.

Said Juliana Danyelle Stuart: "They are cute, but I think that I have a better booty than some of the contestants. Next year I will take part."

The symbolic significance of the bumbum in Brazilian culture cannot be underestimated, as shown by the wild popularity of bum dancing among the young.

"I think that the tropical climate, the carnival and all this racial mixing gives the Brazilian woman a unique biotype on the planet," pageant organizer Cacau Oliver, a well-known female beauty spotter, told AFP in October.

"The Brazilian woman's derriere is a part of the body that the whole world admires and the contest just reaffirms this," he added.

Pippa Middleton beats them by a mile.

Did I mention I LOVE Brazil? Such a cheeky country, and not far behind either :P, everyone can unite by luscious curves, think about it ;).