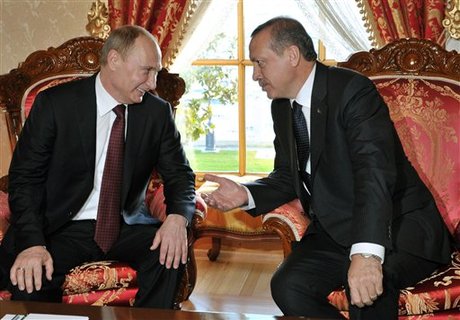 Russian President Vladimir Putin on Monday warned Turkey that the NATO deployment of Patriot missiles along its border with Syria could exacerbate tensions.

He met with Turkish Prime Minister Recep Tayyip Erdogan in an Istanbul summit that failed to yield a common response to Syria's conflict.

Russia vehemently objects to Turkey's NATO request for the deployment of Patriot missiles as Assad's regime clings to power and suppresses a rebellion.

Moscow has warned that such a deployment could spark broader a conflict pulling in the Western military alliance. Putin underscored the point Monday, the eve of a NATO meeting in Brussels that is expected to decide on Ankara's request.

"As they say, if a gun is hung on the wall at the start of a play, then at the end of the play it will definitely fire," Putin said at a joint press conference with Erdogan.

"Why should we need extra shooting at the border? We are urging restraint."

Though Turkey and Russia have growing trade and energy links, they remain at loggerheads over Syria.

Moscow is a staunch ally of Damascus, routinely blocking resolutions against Assad's regime at the U.N. Security Council, while Ankara's relationship with its neighbor has collapsed over the conflict and a series of cross-border shellings and other incidents.

Turkish tensions with Russia came to a head in October when Turkey intercepted a Syrian plane flying from Moscow to Damascus on suspicion that it had military cargo, drawing an angry response from Russia, which said it was carrying non-restricted radar equipment.

Some 120,000 refugees have streamed across the border into Turkey, with many more seeking safety in other neighboring countries.

Putin said Russia is not necessarily a supporter of the Syrian regime but was concerned about how it would be replaced.

"We are not inveterate defenders of the current regime in Syria," Putin was quoted as saying by Russian state television.

"Other things worry us, like what will happen in the future?"