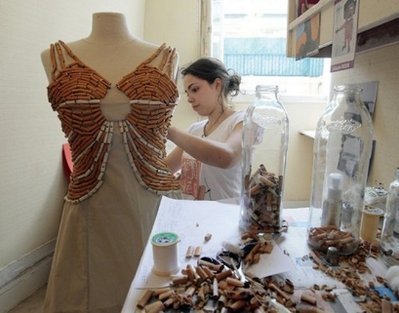 France's latest fashion statement has nothing to do with haute couture and a lot to do with saving the streets of the city of Paris from the scourge of cigarette butts.

Paris student Flore Garcia Bour, 22, is picking up butts by the hundred from the streets and stitching them painstakingly into a dress in an effort to draw attention to the smelly detritus degrading the city's streets.

The international relations graduate says she does not aim to stop smokers lighting up, just to change their behavior.

"I have always been revolted by the number of butts dropped on our streets while it would be simple to change habits and to put them into a rubbish bin," she told Agence France Presse.

"I hope my dress shocks smokers and plays a role in making them more aware of the damage they do by throwing their butts away that degrade in 18 months at best or 12 years at worst."

She started stitching the dress on April 26 and plans to finish it on May 15 with cigarette butts collected in jars from all over the city then treated to remove the evil smell.

Her progress can be seen on a blog in French on www.lemegotdefi.com.