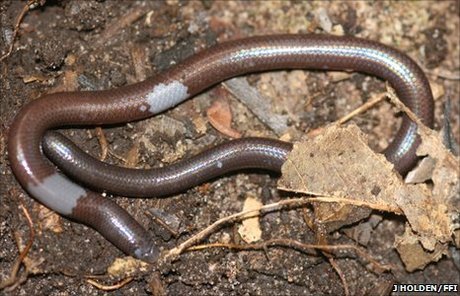 A Cambodian scientist has discovered a new species of blind and legless lizard that looks like a snake, conservationists said.

The small reptile, which mostly lives underground, was given the name dibamus dalaiensis, after the Dalai mountain in southwestern Cambodia where it was found, according to conservation group Fauna and Flora International (FFI).

"At first I thought it was a blind snake," said Neang Thy, who works as a zoologist with the Ministry of Environment and FFI and made the discovery.

"But when we looked at it closely we found it was different from other species," he told Agence France Presse.

Other types of blind, legless lizards have already been documented across Asia, but none had ever been found in Cambodia and it took more than a year of research to confirm Neang Thy had indeed stumbled upon a new species.

The female lizard has no limbs at all, whereas the male "has very short legs that he does not use," Neang Thy said.

The find marks the first time a Cambodian researcher has formally identified a new reptile, FFI said in a press release earlier this week.

"For one of our national colleagues to discover this unusual species and make the description is particularly satisfying," said Berry Mulligan, FFI's Cambodia operations manager.