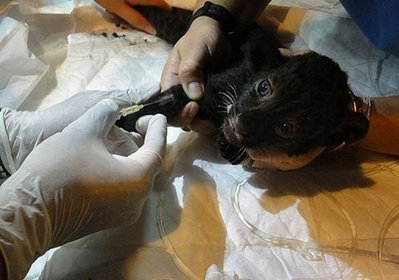 A man whose luggage contained a baby bear, a pair of panthers, two leopards and some monkeys was arrested as he tried to smuggle the live animals out of Thailand, police said Friday.

Noor Mahmoodr, a 36-year-old citizen of the United Arab Emirates, was detained soon after midnight by undercover officers at a Bangkok airport with the animals -- all aged under two months -- in his cases.

The man, who was trying to get the creatures onto a first-class flight to Dubai from Suvarnabhumi airport, was charged with smuggling endangered species out of Thailand, Colonel Kiattipong Khawsamang of the Nature Crime Police told Agence France Presse.

He said one of the bags had been abandoned in an airport lounge because the animals were being too noisy.

"This is a very unusual case and a very large one so we really applaud the Thai police for going after them as strongly as they did," said Roy Schlieben of wildlife protection group FREELAND, whose staff were present at the arrest.

Several people were thought to be involved and police investigations are under way into a wider network of traffickers, Schlieben said. The animals were taken into the care of local veterinarians.

"There's a pretty strong likelihood that some of them wouldn't have survived the flight in the condition they were in," he told AFP.

"The fact they were transported alive would indicate the person at the other end wanted to keep them in their residence or some sort of zoo, or maybe even breed them," he said.