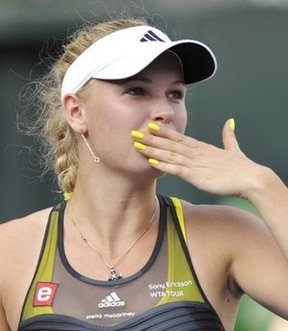 World number one Caroline Wozniacki moved to within one win of the year-end top spot when she continued her 12-week hot streak at the WTA Championships here on Tuesday.

The 20-year-old Dane outplayed Elena Dementieva, the former Olympic champion from Russia, 6-1, 6-1, bringing her 31st win in 33 matches since the start of August, during which she has won five of her seven tournaments.

Once again Wozniacki's rhythm, timing, and superb movement were again conspicuous as she overwhelmed the tournament's most experienced player, one who has qualified for the season-end event ten times.

"Of course, now I'm the player to beat, you know, it's just a nice feeling," Wozniacki said.

"It's nice to know that I've done such good results that I'm the number one player in the world. That's a fantastic feeling."

Her confidence was in evidence from the start, when she broke serve immediately, raced to a 3-0 lead, and signaled to Dementieva that most of the rallies could only be won by much graft.

Soon Dementieva was trying to use sudden drop shots to break up Wozniacki's pattern of containment and mobility. But all three attempts failed in the seventh game, effectively gifting the favorite the first set.

Dementieva fought back well from 0-40 in the opening game in the second set, but it was the last time she looked likely to get back on terms.

Soon she was another break down, by which time her second serve - which ended with only an 18 percent success ratio - was already beginning to look vulnerable.

When Dementieva tried a gambler's ploy by rushing the net at break point in the fifth game and was comfortably passed, putting her 1-4 down, the match was effectively over.

"It was a very nice start, definitely," said Wozniacki.

"I'm very happy to be through this first match. It's always tough to start a new tournament, and against Elena, I have had many tough matches in the past. So it's nice to get one like this."

The Wimbledon and U.S. Open finalist from Russia dropped only three games against Jelena Jankovic, the former world number one from Serbia, who looked well below par.

Jankovic, who has been suffering from sinus problems, sweated unusually heavily and, after battling hard in the seventh, eighth and ninth games but still losing the first set, ceased to present a serious challenge.

"I finished the match but had a really hard time," Jankovic said. "There were moments when I felt I was going to give up."

Later she had intravenous therapy, fluids being inserted straight into a vein.

"I had difficulty breathing, felt dizzy and tingling and didn't have any power," she added.

Zvonareva however played well, making fewer and fewer mistakes as the match went on.

"But I still have to improve my consistency. That is the most important thing," she concluded.

The 6-3, 6-0 win maintained Zvonareva's outside chance of snatching the year-end world number one ranking after the finest season of her career. That though will require Wozniacki to lose Wednesday's encounter against Samantha Stosur.

And even though the world number five from Australia won well - by 6-4, 6-4 against French Open champion Francesca Schiavone -- a win against Wozniacki does not look likely.(AFP)