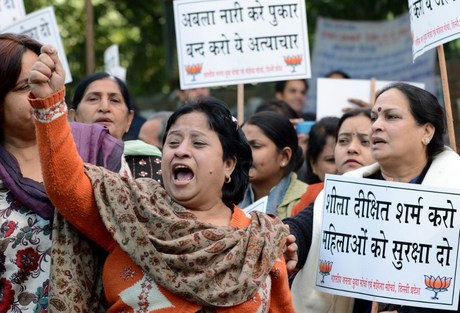 Riot police fired water cannon Wednesday at a protest in New Delhi over the gang-rape of a 23-year-old student, as leader of India's ruling party Sonia Gandhi swelled a wave of anger over the attack.

During the protest screened live on television, police could be seen hosing down demonstrators after a group of them tried to tear down steel barricades outside the official residence of New Delhi's Chief Minister Sheila Dikshit.

Clashes erupted between protesters and police at the demonstration, one of a series being held in the capital following Sunday night's attack on a bus.

The victim, who was thrown off the vehicle after the attack, is in a critical condition in hospital. Her male companion was also seriously injured by the same group of attackers.

Four people, including the bus driver, have so far been arrested, while a hunt is ongoing for two other suspects. Three of those arrested appeared in court on Wednesday and were remanded in custody.

Before the violence broke out, protesters could be seen carrying banners and chanting: "We want equal rights for women."

One young woman, who described herself as a student at Delhi University, said there had to be a change of attitude among the authorities, who, she said, tried to pin the blame for sex attacks on victims.

"Women are told that if they go out late at night, they will be raped," said the student in an address to the crowd.

"As a woman I want to say that we are also human beings and you need to treat us as human beings. You will need to give us equal rights.

"It is a question of our fundamental rights... We want to be able to go out in Delhi at midnight if we want."

Rape cases in India more than doubled between 1990 and 2008 according to official data. Sunday night's case was the latest in a series of particularly brutal attacks in the capital.

Gandhi, the leader of the main ruling Congress party and India's most powerful politician, described the attack as a source of shame for the capital after she paid a visit late Tuesday to the hospital where the victim is being treated.

In a letter to Dikshit, Gandhi said that "such violence and criminality needs not only to be condemned, it calls for a concerted effort to fight it.”

Describing the incident as a "monstrous crime,” Gandhi said it deserves not only universal condemnation but also the "government's most urgent attention.”

In a bid to stem the growing anger, Home Minister Sushilkumar Shinde announced in parliament that there would be an immediate crackdown on buses having tinted glass and heavy curtains -- measures that should already be in force.

"They shall be impounded immediately if they do not remove them. All buses will be asked to keep their lights on while plying at night in Delhi," he said.

According to police and reports, the rape took place over a period of more than 40 minutes on Sunday in the back of a bus which had stopped to pick up the two victims who had spent the evening at the cinema.

Police said the six suspects had taken the bus for a "joy-ride" and offered to take the student and her companion home for a regular fare.

"They began molesting the girl and her companion bravely fought back trying to save her but these men attacked him with an iron rod," police commissioner Neeraj Kumar told reporters on Tuesday.

"The victim was dragged to the rear of the bus and brutally beaten and raped."

Three of the suspects appeared before a city magistrate on Wednesday where a police request for a custody extension was granted.

New Delhi's police chief on Tuesday demanded the death penalty for people convicted of rape, a crime that currently carries a maximum punishment of 10 years in prison.