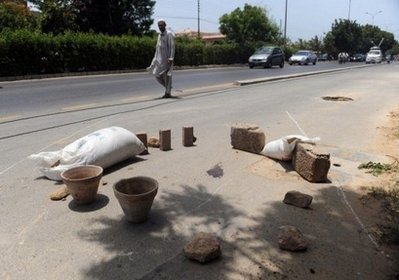 A Saudi diplomat was killed in a drive-by shooting near the consulate in Karachi on Monday, the second attack on Saudi interests in Pakistan's biggest city in less than a week, officials said.

The motive of the attack was not immediately clear, but authorities said they were investigating whether it was connected to the death of Saudi-born Osama bin Laden, who was killed by U.S. forces in Pakistan on May 2.

An official from the media section of the Saudi embassy identified the man as a Saudi diplomat. Karachi police named him as Hassan al-Khatani.

Pakistani police told Agence France Presse that the Saudi had been driving a vehicle with diplomatic plates when two motorcycle riders unleashed a hail of gunfire at a crossroads in the city's upmarket Defence neighborhood.

"The consulate employee died of multiple bullet wounds on the spot," said Fayaaz Leghari, the police chief of southern province Sindh, of which Karachi is the capital.

"The attackers fled on the motorbike," he added.

"At this moment, we can't say who killed him," Leghari said.

"We are investigating if it was linked to the Abbottabad operation or was an isolated incident," he said.

From its side, Saudi Arabia condemned the attack as "criminal.”

"The kingdom strongly condemns the criminal attack that targeted one of its members, Hasan al-Khatani, who was treacherously assassinated while on his way to work," said a foreign ministry official, quoted by SPA state news agency.

Saudi Arabia had asked the Pakistani authorities "to tighten their security measures around the consulate in Karachi and the Islamabad embassy, and on their staff," said the unnamed official.

"The foreign ministry is continuing its investigations in coordination with Pakistani authorities," SPA reported.