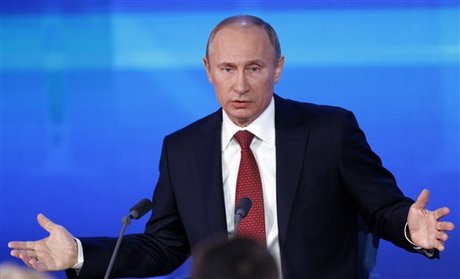 Russian President Vladimir Putin on Thursday denied running an authoritarian system, saying he had many chances to change the constitution during his rule, but never did.

"I cannot call this system authoritarian, I cannot agree with this," Putin told the first major news conference since his return to the Kremlin.

"If I considered a totalitarian or authoritarian system preferable, I would simply have changed the Constitution, it was easy enough to do, it doesn't even require any sort of national vote," Putin said.

"It was enough to take this decision through the parliament," Putin said. "It was a conscious decision on my part to step down to second position."

He added that he "didn't have the goal of coming back in four years" as "nobody knew what would happen once the (financial) crisis began.

Putin also shared his vision of what democracy is. "We have this notion that democracy is trotskyism, anarchy. But that is not so," he said. "Democracy is first and foremost obeying the law."

Putin over his first two terms in the Kremlin between 2000 to 2008 strengthened what he called a "power vertical" in the country, ending gubernatorial elections in his most controversial decision.

He served as prime minister between 2008 and 2012 as his protege Dmitry Medvedev moved into the Kremlin, and the two announced in late 2011 that they will be swapping posts once again, leading the public to accuse Medvedev of acting merely as a "seat warmer" for Putin.