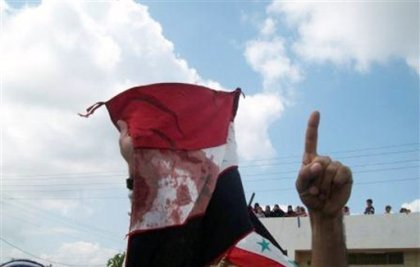 Half of Kuwait's MPs urged the government on Tuesday to sever ties with Damascus and expel its ambassador in protest at Syria's deadly crackdown on anti-regime demonstrators.

Twenty-five out of 50 MPs called on the Kuwaiti government to "cut ties with the repressive (Syrian) regime and to expel its ambassador in Kuwait," in a statement received by Agence France Presse.

The 25 MPs, mostly from the opposition, denounced the "massacre" in Syria where the regime has repressed "peaceful demonstrations of the Syrian people defending their legitimate rights to liberty and justice," it said.

"We will take further steps to support the resisting people (of Syria) and we will work on isolating this regime internationally," MP Walid al-Tabtabaie told AFP.

The lawmakers criticized Damascus for denying entry to a Kuwaiti humanitarian aid convoy sent to Syria's southern city of Daraa, hotspot of the revolt against the regime.

More than 850 people, including women and children, have been killed and at least 8,000 arrested in the crackdown on the two-month-old protest movement, according to rights groups.