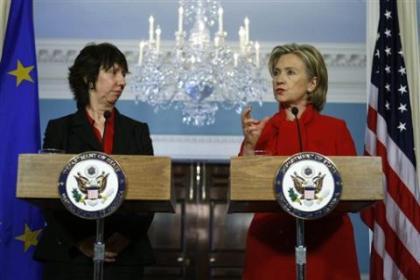 The United States and the European Union warned Tuesday that they will within days take further punitive steps against Syria over its deadly crackdown on pro-democracy protests, as France said the U.N. Security Council is close to achieving a majority for a resolution to condemn the repression.

The warning came as diplomats in Brussels told Agence France Presse that EU ambassadors were due to decide Tuesday whether to add President Bashar al-Assad's name to a list of Syrian officials targeted by a travel ban and assets freeze.

In her talks in Washington with European Union foreign policy chief Catherine Ashton, U.S. Secretary of State Hillary Clinton said the pair had expressed their "serious concern" about the violent crackdown in Syria.

"President Assad talks about reform, but his heavy-handed, brutal crackdown shows his true intentions," Clinton told reporters, adding that his regime had "embraced the worst tactics" of its ally Iran.

Recalling that both Washington and Brussels have imposed sanctions against senior Syrian officials, Clinton said the pair "discussed additional steps that we can take to increase pressure and further isolate the Assad regime."

She said afterwards that such steps will be taken "in the days ahead."

U.S. officials have not ruled out sanctions against Assad.

Clinton repeated calls for Syria to "stop the violence and the arrests, release all political prisoners and detainees, and begin to respond to the demands of the people by a process of credible and inclusive democratic change."

Also named in Obama's executive order enshrining the sanctions were Ali Mamlouk, director of Syria's Intelligence Directorate, and Atif Najib, the ex-head of intelligence in Daraa province, the epicenter of the recent political violence.

"I'm very worried about what's happened in the last few days," Ashton said, describing the large number of people that had been killed or detained as "extremely alarming."

Standing next to Clinton, Ashton warned Syria that the matter was "extremely urgent" and said: "If the government really does -- as it keeps telling us it does -- want to see some kind of change, it's got to be now.

"I think we're all very aware that the situation is so grave that it's now in a situation where we need to consider all of the options. And I think there will be a number of moves in the coming hours and days that you will see."

In Brussels, diplomats told Agence France Presse that Assad is one of a handful of people to be added to a list of 13 Syrian officials already hit by EU sanctions due to their involvement in brutal crackdowns against protesters.

Tightening the screws on the Assad regime, the EU last week issued an arms embargo as well as a visa ban and assets freeze against the president's brother, four of his cousins, and others in his inner circle.

"The mood is to target Assad as there has been no change of course in Syria," said a diplomat who asked not to be named.

Ashton last week warned Assad he could be next.

"It seems that a majority of nine votes is being assembled right at this moment," out of the Security Council's 15 members, Alain Juppe told parliament.

"There is still the threat of a veto by Moscow and Beijing," two of the five permanent members who have the power to block resolutions, he added.

Syria has been roiled by unprecedented protests for two months that have threatened Bashar al-Assad's authoritarian regime. Rights groups say more than 850 people have been killed and at least 8,000 arrested.

"We are not giving up," Juppe said. "We are continuing to push for this despite the reticence, not to mention the opposition, of some of our partners," he added, without naming names.

"We are not alone," he said. "To obtain a Security Council resolution it is necessary to avoid a veto by a permanent member and then gather nine votes. We have been fighting with our British friends for weeks to achieve this result."

France "called on President Bashar al-Assad to start a program of reforms to heed the aspirations of the people," Juppe said. "He has not listened to us, so we have condemned unreservedly the use of repeated and bloody violence."