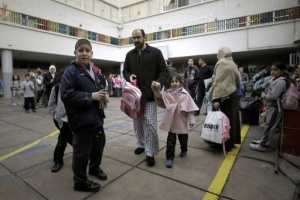 Public and private school teachers as well as the Lebanese University teachers staged a warning strike Wednesday, to protest the political deadlock and the vacuum in Lebanon.

Around 100,000 teachers in the public and private school sectors went on strike after the teacher’s syndicate agreed on staging warning rallies to protest economic and social problems, An Nahar newspaper said.

The large-scale strike includes teachers affiliated with the March 8 and 14 forces in an eye-catching stance, after all unions and syndicates backed by all the political parties agreed on the same demands.

Al-Liwaa newspaper remarked that caretaker Education Minister Hasan Mneimneh said that the movements of the teachers syndicate are of a national nature. The protest came as a “cry because of the vacuum in the country and the incapability to form a cabinet.”