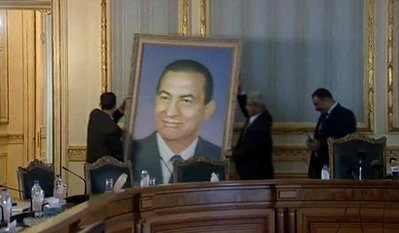 Egypt's ruling military council dismissed on Wednesday a report that it might pardon ousted leader Hosni Mubarak or his family, saying it does not intervene in judicial affairs.

"There is absolutely no truth to what has been reported by the media that the supreme council is moving towards a pardon for former president Mohammed Hosni Mubarak or his family," the council stated on its Facebook page.

"The Supreme Council of the Armed Forces does not interfere in one way or the other in legal procedures to hold the former regime symbols accountable," the statement read.

Mubarak has been detained since April on suspicion of involvement in the deaths of protesters and corruption. He is under arrest in a hospital, where he was treated for a heart attack during an interrogation.

His two sons Alaa and Gamal are being held in a Cairo prison while his wife Suzanne, after relinquishing her assets, was released on bail as she also faces a corruption investigation.

An Egyptian newspaper, citing military sources, said Mubarak was preparing a letter of apology and to hand over assets, hoping that would secure him amnesty.

The 83-year-old veteran president was overthrown in February after more than two weeks of mass protests. Tens of thousands of demonstrators since then have called for his trial.