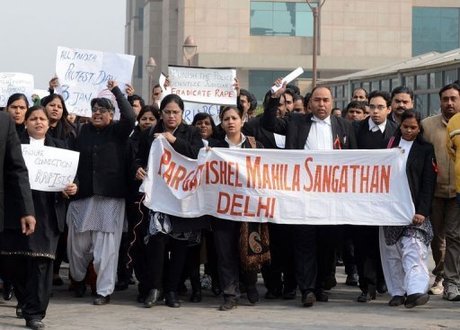 Indian police on Thursday formally charged five men with murder, kidnapping and rape following the fatal gang-rape of a young woman that appalled the nation.

"We have filed the charge sheet against the five accused," an investigating police officer told a magistrate hearing the case in the Saket court complex in New Delhi.

The five men, who could face the death penalty if convicted, were not present when the media were allowed into the courtroom. Journalists were initially prevented from listening to proceedings, sparking chaotic scenes outside.

The men face at least seven charges, including murder, kidnapping, rape, robbery and attempting to destroy evidence. The next hearing in the case was set for January 5.

A police charge sheet under Indian law lays out the charges against the accused and details the key evidence against them.

The 23-year-old victim in the gang-rape case, who died at the weekend from her horrific injuries, gave a statement to police immediately after the attack.

Her boyfriend, who was with her at the time and was also attacked, has also given an account.

Should the rapes end after killing of those 5 monsters?
Should anything needs to be changed in India and Middle East Education or not?