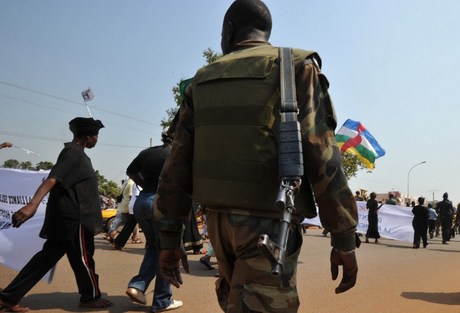 Hopes that the conflict in the Central African Republic might be resolved through negotiation took a hit Friday when rebels said they were not informed about peace talks supposed to be taking place next week.

The rebels also repeated that any peace deal must include the departure of President Francois Bozize -- a demand flatly rejected by the office of the president, who came to power in the desperately poor, landlocked nation after a coup.

Regional grouping the Economic Community of Central African States (CEEAC) is hoping to host peace talks involving the rebels and Bozize's government in Gabon from Tuesday.

But Eric Massi, a spokesman for the rebels, said from Paris that they had not been informed about the initiative.

"I'm not aware of that. This is the first I've heard of it. It's incredible," Massi told AFP.

His comments contradicted claims by CEEAC officials that the rebels had agreed to the talks in Libreville.

A CEEAC source earlier told AFP that a delegation from the Seleka coalition of three rebel groups -- supposedly including Massi -- would arrive in Libreville on Sunday ahead of the planned meeting with representatives of the Central African Republic (CAR) government.

The official said General Guy-Pierre Garcia, the deputy secretary general of the CEEAC, had been in contact with the rebels.

"Their leader Michel Djotodia made the decision," he said.

Massi rejected that claim: "I spoke to Michel (Djotodia) this morning by telephone and he did not speak to me about that.

"I can't see what we are going to negotiate in Libreville if it is not Bozize's departure."

The rebels have repeatedly questioned Bozize's sincerity in offering to form a government of national unity and called for him to leave power.

The president's office said Friday that demand was impossible.

"It's out of the question to negotiate on the departure of President Francois Bozize," adviser Stanislas Mbamgot told AFP.

Seleka launched its offensive on December 10 from the north and marched across much of the country before halting its offensive within striking distance of the capital, in the south.

Pending possible negotiations, most of the rebel forces were stationed Thursday in Sibut, 160 kilometers (100 miles) north of the capital, Bangui.

The UN Security Council was on Friday expected to support a statement proposed by France, the former colonial power, backing peace talks.

The rebels, who have seized several key towns with ease, have stated they want the government to respect the terms of peace accords signed in 2007 and 2011 that provided for disarmament, demobilization and funding for the social reintegration of former rebels in the insurgency-prone country.

France has been pushing hard behind the scenes for talks between the government, the rebels and the political opposition.

A Chadian rebel movement on Friday denied lending support to rebels in neighboring CAR, refuting a claim by that country's government.

Binoua on Thursday alleged that the Seleka alliance of three rebel groups consisted mainly of rebels from Chad and from Darfur in western Sudan.

He also charged that rebel leaders were linked to Wahabites, who practice a strict form of Islam.

UNICEF meanwhile called on the rebels and pro-government militias to stop recruiting children to fight in the conflict.

The U.N. children's agency condemned the involvement of boys and girls "who may be forced to fight, carry supplies, perform other support roles and be abused as sex slaves by armed groups".

It said that even before the current conflict erupted last month, about 2,500 children were associated with multiple armed groups, including self-defense groups, in CAR.

More than 300,000 children have been affected by the violence in the country, including through recruitment, family separation, sexual violence, forced displacement and having no or limited access to education and health facilities, it said.

The United Nations humanitarian agency (OCHA) meanwhile said there were serious concerns about the protection of civilians amid reports of widespread looting and violence.

An estimated 316,000 people are living in the affected areas, and some 700,000 persons in Bangui are at further risk of an escalation in fighting, it said in its latest situation report.