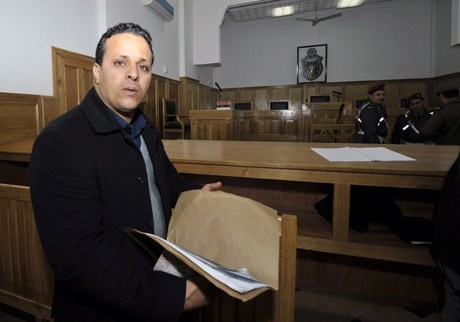 A Tunisian military appeals court on Friday handed down a heavier one-year suspended prison term to a former aide of President Moncef Marzouki for defaming the military, his lawyer said.

Ayoub Messoudi, 33, was earlier given a four-month suspended term on charges of "defaming" the army and "undermining senior officials in the military," lawyer Leila Haddad told AFP.

The court also banned him from carrying a weapon, holding any title or working in the public sector, Haddad said, denouncing the prosecution as a "political trial of a child of the revolution."

Messoudi was indicted after a complaint from the chief of defense staff, Rachid Ammar, and Defense Minister Abdelkarim Zbidi.

On July 15 last year, Messoudi during a television broadcast accused General Ammar and Zbidi of "state treason" for not having informed the president about the extradition to Libya of former Libyan premier Al-Baghdadi al-Mahmoudi.

The extradition was decided by Islamist premier Hamadi Jebali despite opposition from Marzouki, who feared the Libyan my face abuse after being returned to his country.

But another defense lawyer, Anwar Basti, said his client was a victim of a "political revenge" at "this unfair trial where the military is both the judge and a party," for having expressed his opinion freely.

Messoudi recently complained that he had been forbidden to go to his family in France, despite a travel ban being lifted, and had also alleged he was under pressure to retract his comments.