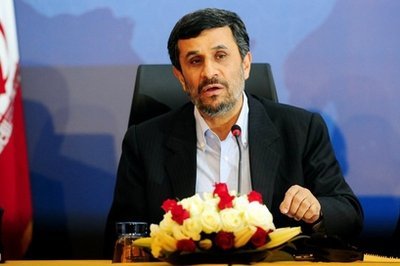 Iranian President Mahmoud Ahmadinejad on Thursday accused Western countries of devising plans to "cause drought" in the Islamic republic, as he inaugurated a dam in a central province.

"Western countries have designed plans to cause drought in certain areas of the world, including Iran," the official IRNA news agency quoted Ahmadinejad as saying in the central city of Arak in Markazi province.

"According to reports on climate, whose accuracy has been verified, European countries are using special equipment to force clouds to dump" their water on their continent, he said.

By doing so, "they prevent rain clouds from reaching regional countries, including Iran," Ahmadinejad charged.

Ahmadinejad also recalled, according to IRNA, an article by "a Western politician," whom he did not identify, in which "droughts in some regions spanning from Turkey and Iran to east of Asia are predicted for the next 30 years."

"The regions (referred to in) the article... include countries whose culture and civilization frighten the West," Ahmadinejad said in support of his argument.

Iranian leaders claim on a daily basis that Western countries, led by arch-foe United States, devise "plots" to undermine the Islamic republic and to impede its economic and scientific development.