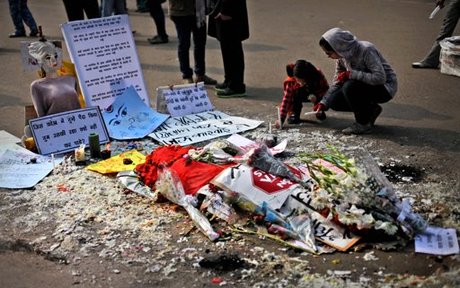 A public prosecutor said Saturday there was strong forensic evidence against five men accused of gang-raping a student in New Delhi on a moving bus as their trial began in a city court.

A district magistrate hearing the case took note of the charges including rape and murder on Saturday, signaling the start of the trial, and ordered the men to appear before her for the first time on Monday.

"We have filed all the evidence," Rajiv Mohan, additional public prosecutor, told the court in Saket in the south of the city.

"The blood of the victim tallied with the stains found on the clothes of the accused," he added, saying that a DNA test had been conducted by the police.

He also said that police had recovered possessions stolen from the victim and her boyfriend, who were thrown out of the vehicle at the end of their ordeal.

As well as the forensic and other evidence, the woman's boyfriend has testified to police and has reportedly identified the culprits.

Mohan said that the woman had died last weekend of "septicemia (blood poisoning) from multi-organ failure due to multi-organ injury" after she was repeatedly raped and violated with an iron bar.

Speaking to Agence France Presse, the presiding magistrate Namrita Aggarwal confirmed she had "taken cognizance" of the charges, adding that this meant the trial had begun.

"They (the suspects) will be produced in court on Monday," she added.

The men, aged from 19 to 35, had been expected to be tried in a different fast-track court amid a clamor for their conviction and warnings from the chief justice that due processes must be followed.

A sixth suspect arrested by police is believed to be a minor, but he is undergoing a bone test to check his age.

Executions are rare in India, but can be sanctioned for the "rarest of rare" crimes.