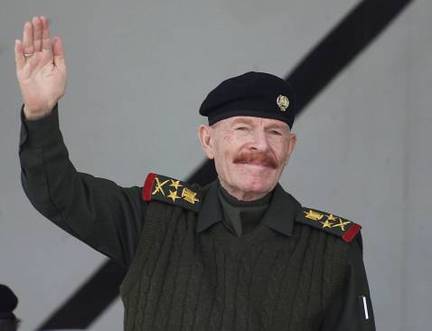 Izzat Ibrahim al-Duri, Saddam Hussein's vice president and the highest-ranking member of his regime still on the run, has backed ongoing rallies in Sunni-majority areas of Iraq in an online video.

The 53-minute video, posted on YouTube on Friday, shows Duri reading a prepared statement behind a desk with a small Saddam-era flag atop it, and appears to be his first video message since April 2012.

The authenticity and date of the clip could not be verified.

In it, the 70-year-old voiced support for protests being held in mostly-Sunni Arab areas in western and northern Iraq that have been airing a multitude of grievances with the Shiite-led government, though primarily criticizing the alleged wrongful arrest of members of their minority community.

"Every city and region, all the Iraqi people, and every national and Islamic power is with you, and supports you in achieving your demands to overthrow the Persian Safavid alliance," Duri said.

He was making a pejorative reference to the Shiite-led government in Baghdad, implying that it was under the domination of formerly Safavid-ruled neighboring Iran.

Duri, who was the king of clubs in a U.S. deck of cards showing the most-wanted members of Saddam's regime, said his Saddam-era group was "studying the firm and fair punishment of all who stand and support the Safavid project."

Up to $1 million is offered for information leading to Duri's arrest or conviction, according to the website of the Rewards for Justice program, which is administered by the U.S. State Department's Bureau of Diplomatic Security.

The protests in Iraq began on December 23, and were sparked by the arrest of at least nine guards of Finance Minister Rafa al-Essawi, a Sunni Arab and a leading member of the secular Sunni-backed Iraqiya bloc, which is part of Maliki's unity government but frequently criticizes him in public.