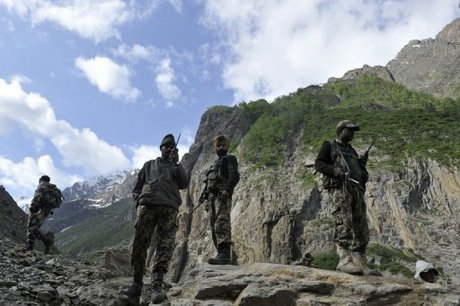 India delivered a dressing-down Wednesday to Islamabad's envoy to Delhi as it accused Pakistan's army of beheading one of two soldiers killed in Kashmir, but both sides warned against inflaming tensions.

While Pakistan insisted no such incident had taken place and suggested a U.N. inquiry be held, India denounced the "inhuman" treatment of the troops who were killed two days after a Pakistani soldier was also slain in the Kashmir region.

As the Indian government mulled its response, Foreign Minister Salman Khurshid struck a note of caution and warned against further moves to inflame tensions.

Khurshid said Pakistan's ambassador Salman Bashir had been "spoken to in very strong terms" after he was summoned for an angry rebuke over the killings.

But in a subsquent press conference, Khurshid said that "whatever has happened, should not be escalated".

"We cannot and must not allow for an escalation of a very unwholesome event that has taken place," he added.

The two Indian soldiers died after a firefight erupted in disputed Kashmir on Tuesday. The Indian army said a patrol moving in fog discovered Pakistani troops about 500 meters (yards) inside Indian territory.

"We can confirm that one of the Indian soldiers was beheaded by the Pakistani army in Kashmir," spokesman Jagdeep Dahiya told AFP after the next of kin had been informed. "It was a dastardly act as they have taken away the head."

Defence Minister A.K. Antony said the Pakistan army was guilty of "inhuman" behavior in the treatment of the bodies while newspaper headlines stoked the tensions, with the Mail Today denouncing "Pak Army Butchers".

But amid the chorus of condemnation, Pakistan's Foreign Minister Hina Rabbani Khar appeared on Indian television to issue a firm denial and criticize the statements by authorities in Delhi.

"Let me just say that we are a bit appalled at some statements that are coming in from India because the government of Pakistan has absolutely rejected that any such incident took place," she told India's CNN-IBN network.

"It is not Pakistan's policy to not observe ceasefire on LoC," she added in reference to a de facto border in Kashmir known as the Line of Control.

Khar said Islamabad had tempered its language after the death of one of its soldiers on Sunday in a cross-border skirmish and the Indian side should have followed suit.

"You did not see a hostile statement coming in from the foreign minister ... We believe that these issues must be dealt with in a responsible manner," she said.

"We can ask a third party to do investigation on this, you know that U.N. military observers exist, we can call them.

"It is not Pakistan's policy to do tit-for-tat... We are a responsible country, mature country, we must not all go back to having a go at each other."

Khurshid has suggested the attack was designed to "derail" an already fragile peace process between the nuclear-armed neighbors which have fought three wars since independence in 1947.

Relations between political leaders of both countries had been slowly improving following a rupture after the 2008 attacks on Mumbai, which India blamed on Pakistan-based militants.

Steps such as opening up trade and offering more lenient visa regimes have been a feature of recent high-level talks.

Observers said a freeze on high-level dialogue would be among the options for the Indian government.

The clash took place in Mendhar sector, 173 kilometers (107 miles) west of the city of Jammu, the winter capital of the state.

Army sources said there had been further exchanges along the de facto border on Tuesday night which caused no damage and the border was calm on Wednesday.

A ceasefire has been in place since 2003 along the LoC, but it is periodically violated by both sides.

Muslim-majority Kashmir is a Himalayan region that India and Pakistan both claim in full but rule in part. It was the cause of two of their three wars since independence from Britain in 1947.