Report: Al-Rahi to Kick Off Contacts with Rival Parties over Electoral Law 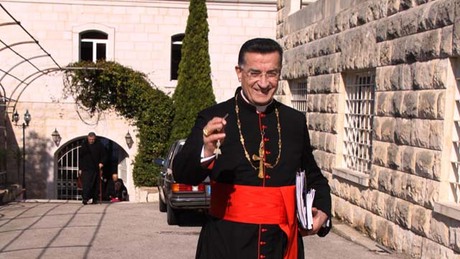 Maronite Patriarch Beshara al-Rahi will carry out contacts with Lebanese foes to convince them to adopt the Orthodox Gathering proposal, which was reached by Christian political parties.

According to al-Joumhouria newspaper published on Monday, the negotiations will be in coordination with President Michel Suleiman.

The daily noted that the Patriarch is keen to press the rival parties to reach consensus over an electoral law.

Bkirki visitors told al-Joumhouria that al-Rahi voiced his support to the Orthodox Gathering draft law but he favors to keep the door open before Suleiman to find a suitable electoral law that provides equality among all sects, in particular the Christians.

“The credibility of Bkirki is important. The Christian factions couldn't have reached an agreement under his auspices and then he backs down on it as claimed,” al-Rahi's visitors quoted him as saying.

Al-Mustaqbal newspaper reported last week that the Patriarch doesn't favor any electoral law over another, simply voicing his rejection to the 1960 law.

“The patriarch did not adopt any law, but he outlined the general characteristics of a law that should achieve fair representation,” sources close to al-Rahi told the newspaper.

The suggestion that has received the backing of top rival Christian parties -The Free Patriotic Movement, the Lebanese Forces, the Phalange Party and the Marada movement – during a meeting in Bkirki was that of the Orthodox Gathering which calls for each sect to elect its own MPs under a proportional representation system based on a nationwide district.

Top Christian parties later held another meeting under al-Rahi in Bkirki, issuing a terse statement, a move that was seen as a retreat from their support for the Orthodox proposal.

the ferzli/fpm/assad law will never be accepted, thus they will have to come up with a new law close to the 50 district law.

you need to forgive him slash: his brain cannot comprehend :)

Let us see:
- al-rahi supports the ferzli law
- qabalan against it
- shia religeous leaders largely against it
In iran, they have wilayat al-faqeeh. In lebanon, we have many wilayat al faqeeh. On top of it, we have sectarian people who are willing to discriminate against each other and adopt a sectarian and patently immoral law. The seeds of the next civil wars.

I hope you are right. The history of lebanon is not encouraging.