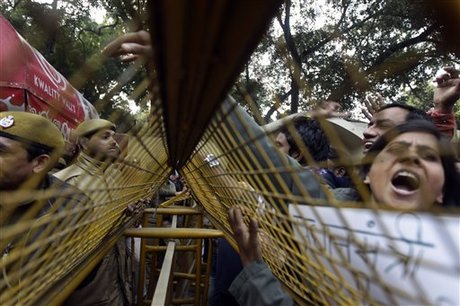 The case against five adults accused of gang-raping and murdering a student in New Delhi was moved on Thursday for trial in a fast-track court, a lawyer for one of the defendants said.

"The magistrate has committed the case to the sessions court which is fast-track," Sadashiv Gupta, the lawyer for fruit-seller Pawan Kumar, told reporters outside a district court in south Delhi. The court would hold its first hearing on the case on January 21, Gupta added.

Meanwhile, one of the men accused of taking part in the crime that outraged India has been badly beaten up in jail by other prisoners, his lawyer said.

A.P. Singh told reporters that his client Vinay Sharma, a gym instructor accused of the murder and rape of the 23-year-old woman on a moving bus last month, was in agony during a court appearance on Thursday.

"Vinay Sharma was badly tortured in jail by other inmates who pounced on him. He was not in a position to stand up in court because he was in great pain," Singh said.

"It is sad the jail authorities cannot provide security to them," he added.

Twenty-year-old Sharma is one of six people -- one of them a juvenile -- arrested over an attack that has fueled nationwide anger and led many in India to stage mass demos, protesting the country's treatment of women.

The case is expected to be transferred to a fast-track court later this month, as calls grow for a swift trial and stiffer penalties for sex attackers.

The five adults could face the death penalty if convicted.

A lawyer for another defendant, bus driver Ram Singh, told reporters he would ask the Supreme Court to transfer the case out of the Indian capital, saying: "I know we will not get justice in Delhi".

A wide-ranging gagging order has been imposed on media reporting of the case.

The young student died on December 29, 13 days after the attack, due to severe internal injuries suffered when she was violated with a metal rod.