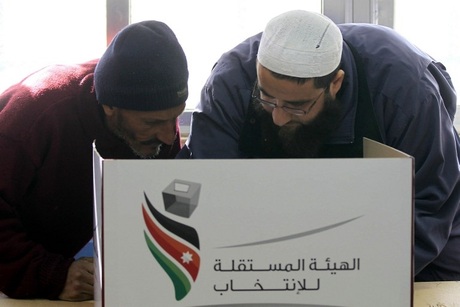 Jordan's opposition, which boycotted Wednesday's election, shed doubt on the 44-percent turnout announced by the government and alleged vote buying marred the polls.

"The turnout is very weak. The figures announced by the government are not accurate. The accurate turnout was around 16.7 at 3:00 pm (1200 GMT)," the Muslim Brotherhood said in a statement.

"There are several violations in the process, including vote buying and fake voter cards. We have information that security agencies have a scheme to increase turnout."

The Independent Election Commission announced a turnout of 44 percent of the registered electorate of 2.3 million, two hours before polling stations were due to close at 1600 GMT.

"Between 1,000 and 1,300 people are voting countrywide every minute," commission spokesman Hussein Bani Hani told reporters. "We are not focusing on the turnout. We are concentrating on the integrity of the election."

The Islamists and the National Reform Front of former premier and intelligence chief Ahmad Obeidat boycotted the polls, arguing that there was no real will to reform.