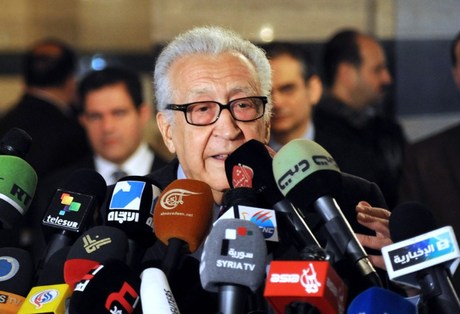 The U.N. and Arab League chiefs on Wednesday pledged "total support" to beleaguered Syria envoy Lakhdar Brahimi as he struggles to launch political talks to try to end the country's civil war.

Brahimi has been criticized by President Bashar Assad's government and so far has failed to bring key players Russia and the United States in line behind a transition plan that could end the 22-month-old conflict.

Some diplomats and analysts have speculated that Brahimi, whose six-month mandate comes up for renewal in February, could be considering his future.

Brahimi, U.N. secretary general Ban Ki-moon and his Arab League counterpart Nabil al-Arabi spoke by telephone on Wednesday about the civil war, which the United Nations says has left more than 60,000 dead.

"The two secretaries general expressed total support for the efforts of Mr Brahimi in his exceptionally difficult task in helping to find a political solution to the crisis in Syria," the spokesman added.

Brahimi is in New York and is to meet key U.N. envoys, including the ambassadors for the United States and Russia, before briefing the full U.N. Security Council next Tuesday.