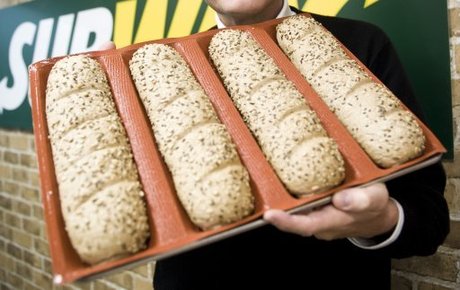 Sometimes if you don't give an inch, you'll wind up in court.

Angry American diners want to take a bite out of the Subway fast food chain over what they say are too short "Footlong" sandwiches.

The bulging lunch bun is Subway's signature offering. But ever since a keen-eyed Australian discovered earlier this month that his "Footlong" measured only 11 (28 cm), and not 12 inches (30.5 cm), the U.S.-based global franchise has been on the back foot.

In what appears to be the first related lawsuit, two New Jersey men filed a complaint Tuesday in New Jersey, alleging that Subway deliberately and systematically shortens its sandwiches to 11 or 11.5 inches.

The plaintiffs "submit that Subway's conduct is an unconscionable business practice," the suit alleges.

"While it may not be the end of the world that consumers got an eleven-inch sandwich instead of the twelve-inch sandwich promised, the simple fact is that these consumers were promised one thing and received something less."

The suit highlights that McDonalds is clear that its famed "Quarter Pounder" burger only weighs that much before cooking, yet "Subway provides no similar warning to consumers."

The controversy, which Subway says is just the result of inconsistencies in applying corporate rules at some franchises, became a viral Internet sensation after the Australian expose.