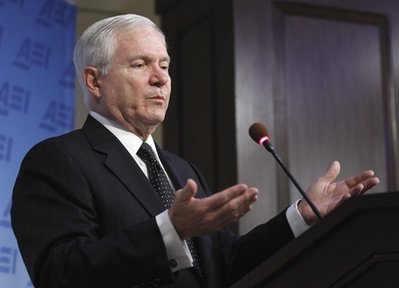 U.S. Defense Secretary Robert Gates has said that Hizbullah has a sizable arsenal of missiles and rockets which could be tipped with warheads carrying biological or chemical warfare agents.

The Shiite group possesses a stockpile that outstrips the number of missiles and rockets held by most nations, Gates said Tuesday after a speech on Pentagon budget issues at the right-leaning American Enterprise Institute.

Hizbullah cruise missiles built to fly up to 65 miles could be used against U.S. naval vessels in the region, according to the Defense Secretary.

"We need to have in mind the greatest possible flexibility and versatility for the broadest range of conflict," he said.

Gates is due to step down at the end of June. The Obama administration has selected CIA chief Leon Panetta as his replacement.

During his speech, Gates urged military and civilian leaders to face up to harsh realities about the future size and role of the armed forces amid a push to contain the country's huge deficit.

Nice. And Israel has nukes and you are not saying anything about it. Oh and they are also doing things in the middle east that make people there dislike you and the USA.. do you care about that?

Looks like the entire west started a pre-war campaign against Hizballa, the best way out of this conflict would be to merge the militia with the central army