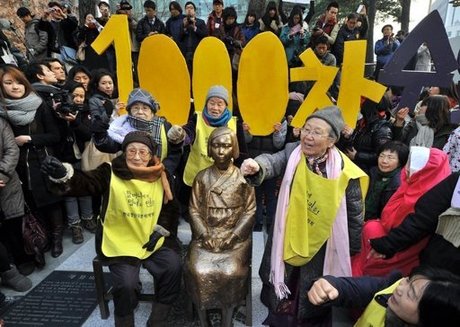 Singapore said Wednesday it has rejected plans by South Korean activists to erect a statue in the city-state commemorating women forced into sexual slavery by Japan during World War II.

The culture ministry denied claims by the Korean Council for the Women Drafted for Military Sexual Slavery that there had been talks about plans to put up such a statue.

"This is not accurate," the ministry told Agence France Presse in an emailed statement.

"There are no ongoing meetings or discussions between the Singapore government and the Korean Council for the Women Drafted for Military Sexual Slavery on this issue. Nor will we allow such a statue to be erected in Singapore."

In Seoul last week the activists unveiled plans to put up the statues -- representing "comfort women" forced into Japanese military brothels during the war -- in a number of Asian countries starting with Singapore.

They also said they had held talks with Singapore authorities and added that a delegation would be sent to the city-state to finalize the plans.

The South Korean group was behind the bronze statue of a young girl with a butterfly settled on her shoulder that was erected in 2011 opposite the Japanese embassy in Seoul.

Other statues were also planned in China, Malaysia and Indonesia, the group had said.

Historians say about 200,000 women from Korea, China, the Philippines and other countries were drafted to work in Japanese army brothels in Asia.

Singapore, which was then a British colony, was among several Asian countries occupied by Japan during the war.