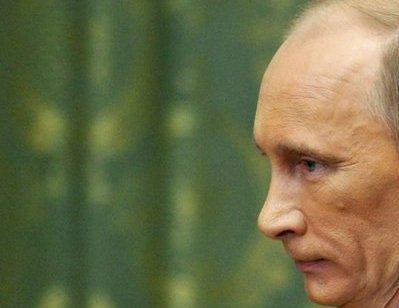 Vladimir Putin, who has carved out a health nut image by wrestling with tigers or judo opponents, raised eyebrows Thursday as he was pictured swollen-faced and caked in make-up, apparently to mask a black eye.

Journalists feverishly speculated that the Russian premier could have taken a punch during a judo session or even had a facelift, after he visited Ukraine on Wednesday slathered in war paint.

"Ukrainian, Russian and Western journalists ... talked only of one thing: How did the Russian prime minister get a black eye?," reported Kommersant business daily's special correspondent Andrei Kolesnikov.

"Could it really be the result of some tough sparring? While it was carefully covered up, it was noticeable to everyone without exception."

While some leaders regularly wear make-up for televised meetings, Putin has always stayed barefaced in the past, journalists said.

Putin arrived for talks with Ukrainian leaders in a "bad mood" and with "something like a big bruise on his left cheekbone. He also had on his face a very noticeable swelling," reported Ukrainian television channel 1 + 1.

"It was all badly covered up with make-up."

"He indeed gets tired," Peskov told Agence France Presse. "He flies around a lot and does not get much sleep."

Journalists noted that a news conference where the leaders were expected to discuss results of the talks was cut short and a planned dinner was cancelled.

Ukraine's Levy Bereg weekly speculated that Putin could have had cosmetic surgery.

"Did Putin have a facelift?" it asked in a headline. The Russian premier could also have had teeth extracted, it added. "Or maybe he had an unfortunate judo session."

Russia is heading for presidential elections in 2012 and neither 58-year-old Putin nor his 45-year-old protégé Medvedev has ruled out standing but they have said they would agree who would run to avoid competing with each other.

Putin's minders are keen for him to project a healthy image and in August Putin was shown on television firing a crossbow at a whale and tossing in an inflatable raft amid high seas off the remote Kamchatka Peninsula in Russia's Far East.

In September, Putin and Italy's Silvio Berlusconi, who visited the strongman premier in Moscow, cracked jokes about hanging on to power to well past 100.