Miqati Vows to Cooperate with March 8, 14 after Cabinet Formation 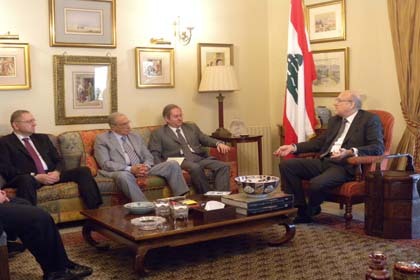 Premier-designate Najib Miqati vowed on Thursday to cooperate with both the March 8 and 14 forces as soon his new government receives the vote of confidence of parliament.

In remarks to a delegation from the Beirut Traders Association, Miqati said his approach to the formation of the cabinet focuses on “preservation of stability, prevention of strife and holding onto the constitution and the consolidation of the national economy.”

The prime minister-designate said that the Lebanese have the right to ask why the cabinet has been delayed but he vowed to hold discussions in accordance with the constitution on any initiative or solution proposed to end the deadlock.

When the government receives the parliament’s vote of confidence, “we will cooperate with everyone,” he said.

Miqati promised the delegation to prioritize the establishment of “an investment climate mainly based on stability, thrust and incentives.”