Serbian, Kosovo Presidents to Meet for the First Time 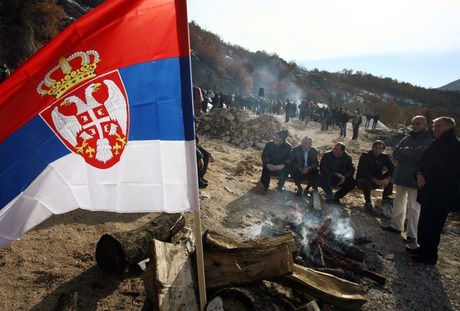 Serbian President Tomislav Nikolic will meet his Kosovo counterpart Atifete Jahjaga in Brussels next week, in a first such meeting since breakaway Kosovo declared independence in 2008, officials said Friday.

A source from the presidency confirmed the tweet's authenticity to Agence France Presse, but could not reveal further details.

In Brussels, officials could not confirm the meeting on Wednesday.

But a spokeswoman for EU foreign policy chief Catherine Ashton said that such an encounter, should it happen, would have a positive impact on normalizing ties between Serbia and Kosovo, a former Serbian province.

"We believe that such a meeting would be important, particularly in the context of the normalization of relations between the two sides, and would like to see it happen as soon as possible," Maja Kocijancic said.

Belgrade does not recognize Kosovo’s unilateral independence declaration from Serbia in 2008.

However in March 2011 under EU auspices, the two sides began talks aimed at normalizing their relations.

Talks between Serbian Prime Minister Ivica Dacic and his Kosovo counterpart, Hashim Thaci, are also to resume in February.

The two prime ministers have met four times since October 2012, when the talks resumed after a break of several months because of general elections in Serbia.

The EU-mediated dialogue led to the opening under joint management of four crossing points on the flashpoint border of northern Kosovo, home to a large Serbian minority which refuses to recognize Pristina's authority.

Also, the two sides have agreed on having so-called "liaison officers" in their respective capitals to boost communication.

Ashton has taken the lead in sponsoring the talks aimed at normalizing ties after Kosovo's unilateral proclamation of independence in 2008.

More than 90 countries, including the United States and 22 of the EU's 27 member states, have recognized Kosovo as an independent state.

The EU has promised to draw both sides closer to the 27-state bloc on condition they resolve trade and security issues that complicate citizens' daily lives.

Serbia is an EU candidate for membership and Kosovo hopes to formalize ties but the European Union says both must pursue dialogue and produce concrete results first.