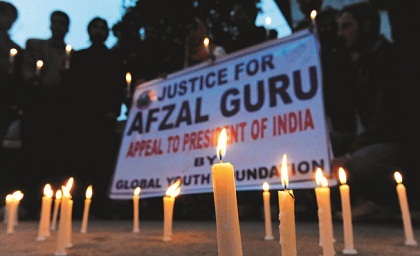 Hundreds of protesters on Saturday rallied in Muzaffarabad, the capital of Pakistan-administered Kashmir, to condemn the execution of a Kashmiri separatist in India.

Mohammed Afzal Guru, a one-time fruit merchant, was hanged at New Delhi's Tihar Jail early Saturday over his role in a deadly attack on the Indian parliament in 2001, after President Pranab Mukherjee rejected a mercy appeal.

Some 400 protesters gathered in Muzaffarabad, burning Indian flags and chanting slogans including "down with India, down with India's farce democracy, we will continue Guru's mission", an AFP reporter said.

The rally was organized by Pasban-e-Hurriyat, an organization representing Kashmiris who migrated to Pakistani Kashmir from the Indian-administered part of the disputed Himalayan region.

Hurriyat chief Uzair Ahmad Ghazali condemned the hanging and announced that his supporters would stage a sit-in in front of the United Nations office in Muzaffarabad on Monday.

Meanwhile, the government of Pakistan-administered Kashmir announced three days of mourning across the state to mark Guru's hanging.

"The state's flag will fly half-mast during the mourning, which started from today," Murtaza Durrani, a state government adviser, told AFP.

He said Guru was hanged under "draconian laws" and claimed that "courts in India are not free and independent". "Nobody should expect any justice from those courts," said Durrani.

Guru was found guilty of conspiring with and sheltering the militants who attacked the Indian parliament in December 2001.

He was also held guilty of being a member of the banned Islamist group Jaish-e-Mohammed, which fights against Indian rule in the divided Himalayan region of Kashmir, where a separatist conflict has claimed up to 100,000 lives.

Five Islamist militants stormed parliament in New Delhi on December 13, 2001, killing eight policemen and a gardener before security forces shot them dead. A journalist who was wounded died months later.