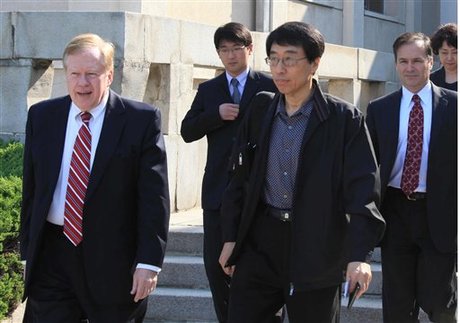 An American citizen detained in North Korea since November on unspecified charges was Saturday on a plane heading back to the United States with a U.S. delegation, Chinese state media reported.

Official Chinese news agency Xinhua said that a team from the U.S. State Department had flown out of communist North Korea with the detained man.

"A U.S. citizen named Eddie Jun Yong-Su, who was detained last November, was also on the plane heading back to the United States with the delegation," Xinhua said.

South Korea's Yonhap news agency had earlier said the delegation had left North Korea after winning Jun's release but did not say whether he was with them.

But it also did not say whether the delegation had taken Jun, a California-based businessman, who had been detained for apparent missionary activities in the hard line communist state.

King's departure came a day after North Korea said it had decided to free and return Jun "on humanitarian grounds in consideration of repeated requests" by recent U.S. visitors to Pyongyang, including King.

King was at the head of a team to assess whether to resume U.S. food aid to the hungry state. U.N. agencies say that six million people urgently need assistance.

Mark Toner, a State Department spokesman, told reporters in Washington on Friday that Jun, whom King visited on Thursday, appeared to be in "decent health" but could not say more about his condition for privacy reasons.

KCNA said the North was also influenced by appeals from former U.S. president Jimmy Carter and evangelist Franklin Graham, who both visited the country in recent weeks and sought clemency for Jun.

An investigation found that Jun had committed a "grave crime" which he had frankly admitted, KCNA said.

Lim Chang-Ho, a professor at a South Korean theological college, said earlier this month that Jun had engaged in "aggressive" missionary activities in the North.

It was the third apparent case in less than a year of an apparent U.S. Christian activist being detained by Pyongyang.

Missionary Robert Park was held on Christmas Day 2009 after walking across the border to make a one-man protest over human rights violations. He was freed in February 2010 after the North said he expressed "sincere repentance".

On January 25, 2010, the North detained Aijalon Mahli Gomes for crossing the border illegally and sentenced him to eight years' hard labor.

Gomes was said to be a devout Christian. He was freed last August after Carter flew to Pyongyang to intercede.

The North's constitution guarantees freedom of religious belief, but in practice, "genuine religious freedom did not exist", according to the U.S. State Department's latest human rights report.