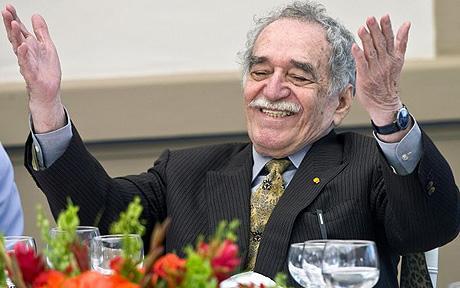 Colombian author and Nobel Prize winner Gabriel Garcia Marquez is putting the finishing touches on a new novel and is about to publish his first book in six years, his editor said Thursday.

The book out Friday in Spain and Latin America, "Yo no vengo a decir un discurso," (I Didn't Come to Give a Speech) is a compilation of 22 speeches Garcia has given throughout his life, Random House Mondadori editor Cristobal Pera said at its presentation.

Garcia did not attend the unveiling, but Pera said the author "is as good as can be expected of an 83-year-old man who has come out undefeated in his battle with cancer."

The editor said Garcia, who was last seen in public two weeks ago in Mexico City, was busy completing his latest novel "En agosto nos vemos," whose title in English means "We'll Meet in August" and which awaits a publishing date.

Garcia's compilation of speeches will be his first book published since "Memorias de mis putas tristes" (Memories of My Melancholy Whores) in 2004.

"I Didn't Come to Give a Speech" begins with Garcia's high school commencement speech in 1944 and ends his words before the Academies of the Spanish Language in Spain in 2007.

"It's an indispensable complement to the works of Garcia Marquez," said Pera. "He's a man who hates giving speeches, but here you have a selection that reflects the essence of what he is, of his political and literary passions, and of his friends."

The author of One Hundred Years of Solitude "always resisted the speech genre, as part of his rejection of formalism," Pera said.

"But it was when he had to give the Nobel (1982) acceptance speech that he agreed to use it to channel all his obsessions."

Pera said Garcia took a year-and-a-half to put together his speeches and settle on a book cover -- he chose a parrot over a hummingbird because parrots have always been "very important in his life."

"In going over these speeches, I rediscovered how I changed and evolved as a writer," Garcia recently said of his new book.(AFP)